Coney Island on Memorial Day was a shadow of its usual summer self. The Cyclone and the Wonder Wheel—the iconic roller coaster and ferris wheel—stood idle. The line for hot dogs at the nation’s first Nathan’s seemed long, but only because masked customers stood a few extra feet apart. A limited number of other restaurants and bars served carryout only, but there was nary a wait anywhere else.

This story is playing out in dozens of shore towns along America’s coastline at the start of Pandemic Summer, as beaches become important cultural and fiscal components of a piecemeal national effort to loosen lockdowns and dial up much-needed economic activity, while avoiding a feared spike in coronavirus cases.

Police officers and Parks Department employees patrolled the Coney Island boardwalk Monday, which was crowded but not packed during the sunniest, warmest part of the afternoon. Many people wore masks; some did not. The beach itself, however, resembled a dreamscape of unforced social distancing: Sunbathers had enough space for a small apartment, as long as they were content to stay dry.

Christian Teny, 18, and his family were not. They had traveled to Coney Island—where Christian grew up—from Jersey City, New Jersey, but left the sand after just 40 minutes once they learned they could not go swimming. “It’s stupid,” Teny told me. “Beaches are for the water.”

Had the Teny family stayed for the three or four hours they had planned to, perhaps they would have bought food and drinks at one of the restaurants on the boardwalk. Had thousands of other families not stayed home entirely this past weekend, perhaps the Coney Island businesses that dared to open would not have suffered the 90 percent drop in revenue they reported compared with what they typically pull in during summer’s unofficial opening weekend.

Without clear national mandates and guidelines, state and municipal authorities have fashioned their own hodgepodge of systems aimed at providing socially distant recreation for stir-crazy residents and business for struggling beach-town shop owners.

[Read: I'm a chef in a seaside town. I’m not an epidemiologist.]

In Los Angeles, beachgoers could swim, but not sunbathe, on Memorial Day. In New York City, they could sunbathe, but not swim. Like the toll of the virus itself, the policies vary widely, even within a state. Tens of thousands of people flocked to the Florida Panhandle’s beaches over the weekend, while Miami’s stretch of sand stayed closed “to avoid major crowds” for another week. As tourist destinations see their tax revenues plummet, the strain on local budgets has, in some cases, upended the expected political divide. Earlier in May, the Democratic mayor of Palm Beach County wrote to Florida’s conservative Republican governor, Ron DeSantis, to ask him to consider accelerating the county’s timeline for reopening its beaches.

Elsewhere, state and local leaders have tried to split the difference by partially reopening beaches. The goal is to draw people back—but not too many, and not for too long.

Officials in Point Pleasant, New Jersey, determined that one beach in the popular shore town could accommodate 197 groups spaced at least six feet apart on the sand. Beaches on Long Island reopened for locals, but urged New Yorkers looking to escape the hard-hit five boroughs to stay away.

Beaches in Los Angeles County have opened for “active” recreation only—walking, running, swimming, surfing—while prohibiting more leisurely activities, like picnicking or sunbathing, that would keep people there for hours at a time. In New York State, Governor Andrew Cuomo declared the beaches open as long as social distancing was enforced. But in New York City, Mayor Bill de Blasio kept city-run beaches, like Coney Island, partially closed—only with the opposite approach as Los Angeles. “Anyone tries to get in the water, they’ll be taken right out of the water,” de Blasio, perhaps channeling former New Jersey Governor Chris Christie from several years ago, warned New Yorkers last week. Officially, the ban on swimming was due to a lack of lifeguards. (A 24-year-old man drowned in the water off a Queens beach last week.) But de Blasio also wanted to limit the allure of the city’s beaches and discourage people from packing the subway to get to them.

On Sunday, a local radio host and activist, Curtis Sliwa, defiantly waded into the water in violation of de Blasio’s orders. Sliwa, who is running for mayor in 2021, was admonished but not removed, and he appeared to be an outlier. Helped by a Saturday washout and cooler-than-normal temperatures on Sunday and Monday, the mayor’s policy appeared to have the intended effect. No huge throngs challenged the swimming ban or dared the police to haul them out of the water.

A pair of police officers on the boardwalk, masks hanging around their necks, told me there had been no such incidents on Monday. When I asked whether they were prepared to pull swimmers out of the water, they shrugged and said they had received no instructions on how to enforce the mayor’s ban. Lucky for them: Both officers were dressed in their standard uniform, and neither seemed eager to make a Baywatch-style dash into the cold late-spring ocean. “We’ll cross that bridge if we get to it,” one of them told me, asking not to be named because he was not authorized to speak with reporters. “I guess we’ll see on July Fourth. That’ll be the real test.”

If the cops had it easy, Coney Island’s restaurants and food vendors suffered. “The businesses did not do very well,” Alexandra Silversmith, the executive director of the Alliance for Coney Island, the neighborhood business association, told me.

The partial opening seemed to expose another tension in the broader debate over easing restrictions on business: Just as policies vary by state and region, so do the cultural attitudes of would-be consumers, between those clamoring to reclaim a normal summer and those who are willing, so far, only to dip a toe in the sand. While foot traffic on the Coney Island boardwalk was decent, Silversmith noted that most visitors weren’t willing to stop and have a beer or a bite. “You have to take off your mask to eat,” she said. “You have to find a spot safe enough.”

For beach towns that depend on commerce—not just short sandy walks or bike rides—and for states that rely on summer tourism for tax revenue, the ripple effect of a skittish public over the next three months could be devastating.

[Read: How New York explains the other 49 states]

Jimmy Kokotas owns Tom’s Restaurant, an 80-year-old Brooklyn diner that opened a second location on the Coney Island boardwalk in 2012. “I would think we barely covered payroll,” Kokotas told me yesterday morning. He guessed that his sales were 50 to 60 percent down from a normal Memorial Day weekend with mediocre weather, and 90 percent off a warm, sunny holiday.

The months ahead are equally uncertain for Kokotas, just as they are for businesses in beach and resort towns across the country. He secured a Paycheck Protection Program loan from the federal government, but is looking for more aid from the city. Tom’s is more fortunate than most in one respect: Unlike many other restaurants, Kokotas has enough room to space out tables once more restrictions are eased. But it could be several more weeks, or longer, before New York City allows any restaurant to more fully reopen. Most Coney Island businesses, Kokotas told me, renewed year-long leases early in 2020, just before the pandemic hit. “Our rents are due, and we have no sales,” he said.

Yet while business owners and conservative activists have been agitating for a faster return to normal in other parts of the country, the trauma of the pandemic has lingered in New York, the national epicenter of the virus, even among entrepreneurs whose livelihoods depend on reopening. Kokotas runs a restaurant, but with an 11-month-old baby at home, he told me he wasn’t eager to eat in one. “I don’t know what’s right and what’s wrong,” he said of the city’s regulations.

The outlook might be even bleaker for Dena Jones, who operates a piña colada stand on a side street off the beach. She was the only vendor open on the block—she pointed to a vacant food stand across the street and told me its owner had died of the virus. On a peak mid-summer day, like the annual Mermaid Parade in June, Jones said she could pull in as much as $20,000 selling frozen cocktails. Last Memorial Day brought in about $13,000. As for yesterday? “I’ll be lucky if I can make $150,” she told me.

“People are scared,” Jones said. “The smarter people are home.” 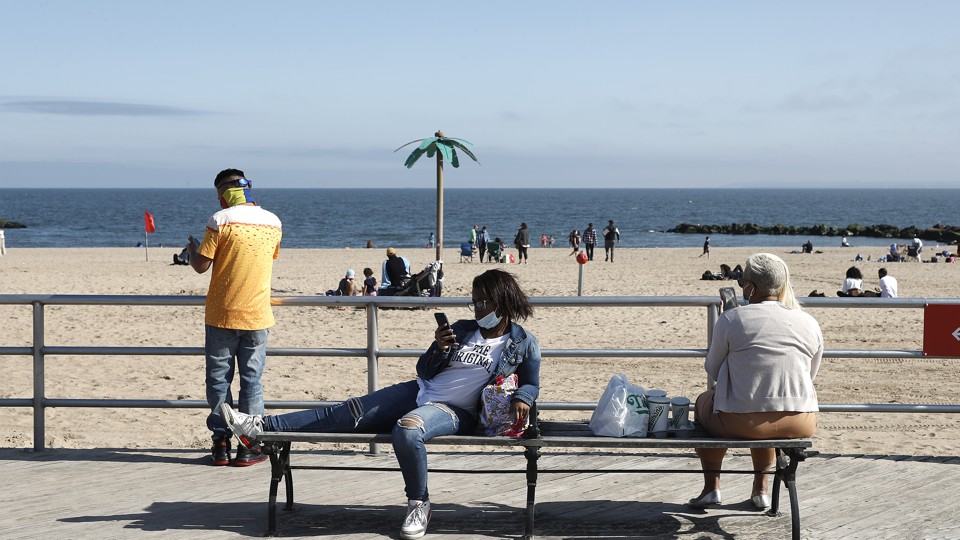