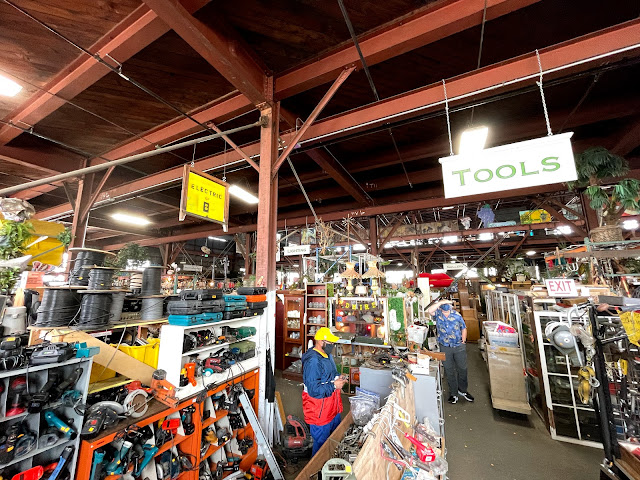 My favorite artist wanted to attend a sketching workshop at a place called Urban Ore in Berkeley. My research of the destination began with looking at Google Earth satellite photos of used toilets. 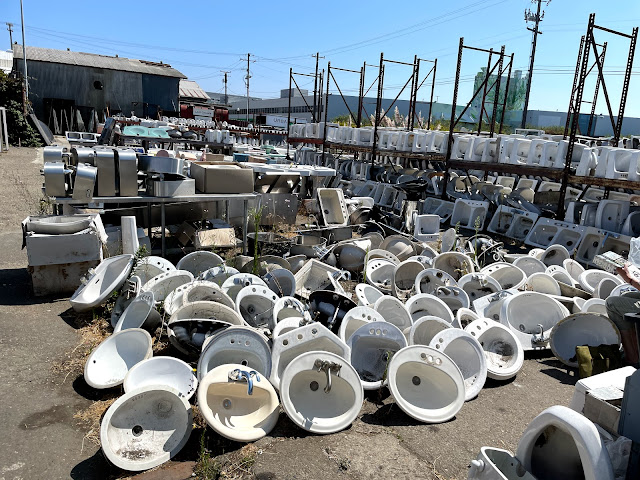 I know these are mostly sinks in the ground-level photo but this does hint at the scale of Urban Ore, which has the tagline "If you're not for Zero Waste, how much waste are you for?" Right there on its website. It's a big place. Parts of it make you think of where things go when people in the first ten minutes of every HGTV show you've ever seen use gentle touches in the 'demo' phase while other parts make you think of a fencing operation. Stacks of appliances. Thousands of doors. Car stereos in a precarious stack.

And, a few bicycles. 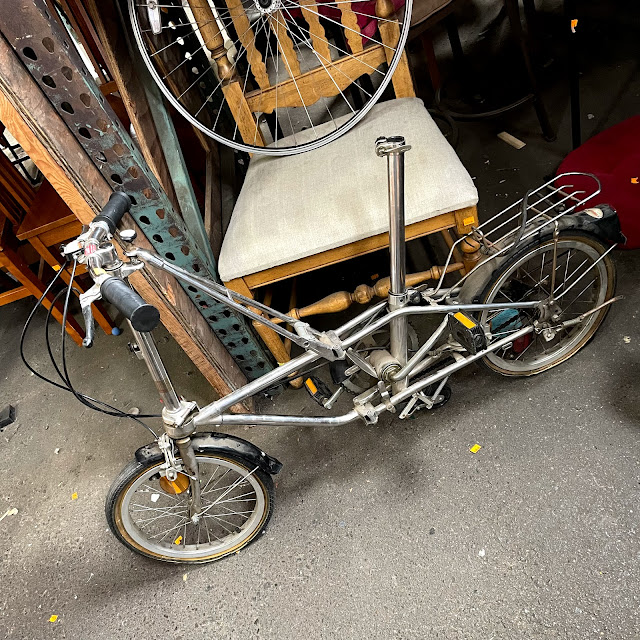 This classic Dahon was in great shape - save for the tires - but I left it where it was so as not to introduce a new tire size into my life.

What was supposed to happen is my favorite artist was going to sketch around Urban Ore while I'd bike around and do some recon. But instead I spent two full hours wandering about, admiring the items - and sometimes thinking about what I could turn into a new workbench for my shop. 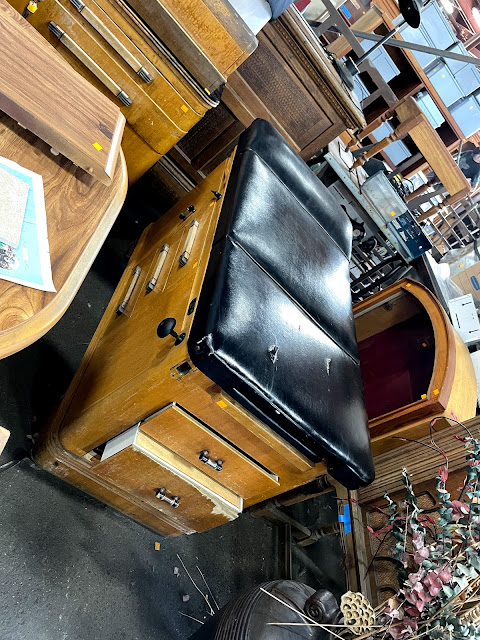 A little extra room in the car and I'd have parted with the few hundred needed to bring this old doctor's office table home. I had visions of replacing the cushions with a countertop and keeping the spool of paper in place to protect the surface rather than the bottoms of patients.

The place is also outfitted with some of the most refreshingly honest and unintentionally hilarious labels I've seen on used goods. 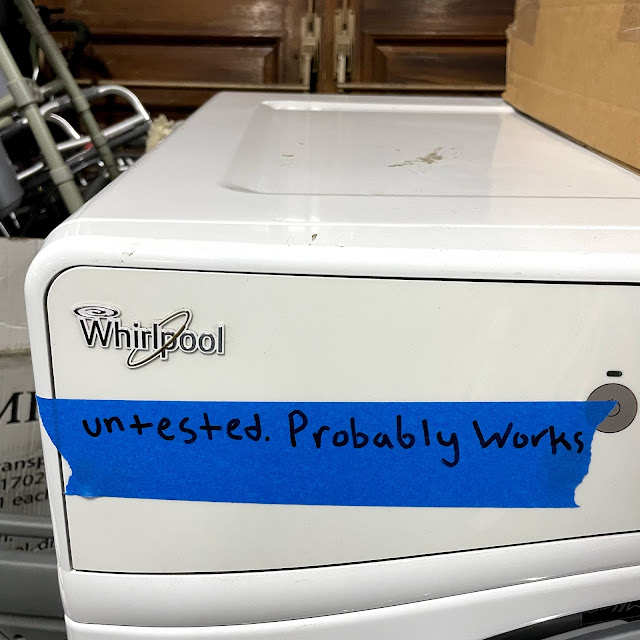 Who needs Las Vegas when you can bet $300 on whether or not you'll have clean clothes for work?

For $59, I bought exactly three things: the first was a Samsonite suitcase for $10 that was formerly the travel pod of someone's Bike Friday. I know because it had familiar scars on the inside where certain bike parts are known to rub in transit and, even more telling, had three small holes drilled in it for the Bike Friday trailer kit - which as we all know is a great platform for building an original bike bike trailer. There's nothing wrong with the case that I use for my own Bike Friday New World Tourist, but as you know I also have a Bike Friday Tandem and I'm hatching a couple's travel plan once the plague goes away.

And I bought these. 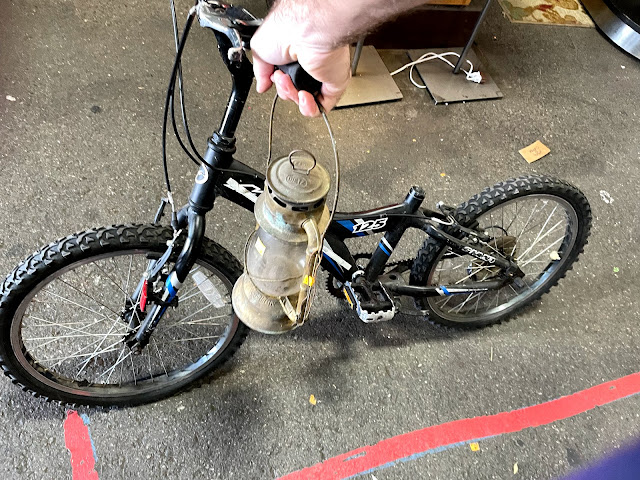 This is a classic lantern that I bought for $9. It will soon be found on a wall on the inside or outside of my house.

This is also a small kid's mountain bike with six speeds, rotten tires, a kickstand that snapped off, bad brakes, a shifter you need a pipe wrench to turn and a derailleur that dates back to the Cretaceous Period. And I had to have it, since I've been interested in building a small mountain bike for my favorite artist, who nearly bounced out of her bike seat while pedaling her hybrid Trek at Wilder Ranch State Park. 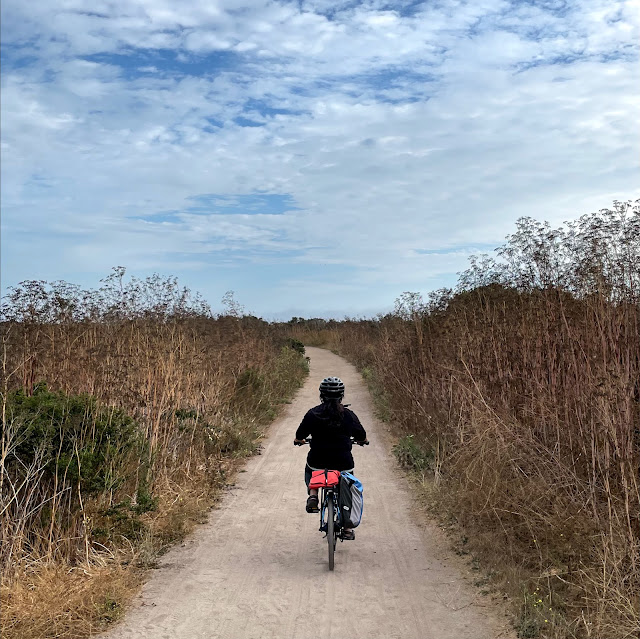 This was taken on a smoother part of the trail - the very bend up ahead was the start of more difficult terrain, so I floated the idea of getting a little mountain bike to see if she'd like it.

When the sketching thing was done, my favorite artist saw and approved of my purchases before we followed the tried-and-true practice of taking our Bike Friday tandem out of the car and rode to nearby Emoryville to Los Moles, where we locked up and fueled up on some great Mexican food. 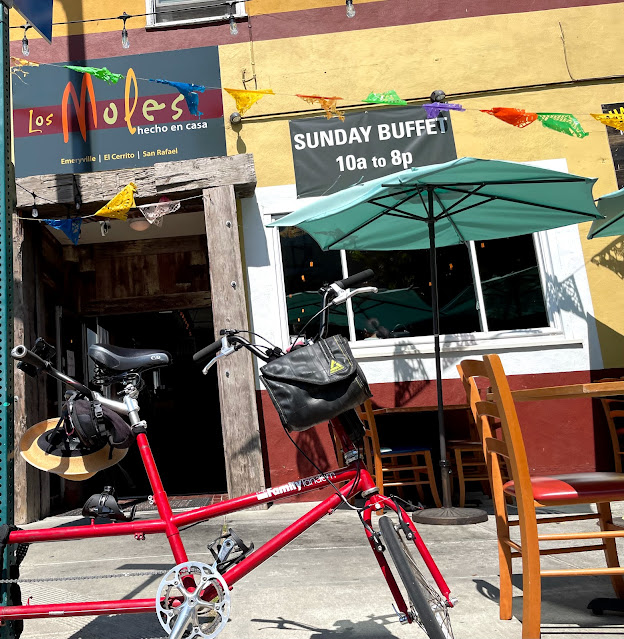 Afterwards, we did about nine miles hitting a few shops and a flea market. I also bought some Bicycle Coffee beans.
I even noticed a place called BORP Adaptive Sports and Recreation and stopped by to learn about it. They make specialized bikes and other equipment for people with disabilities. It's very cool and, as of about thirty seconds ago, are one of #MyNonprofits. You can donate to BORP Adaptive Cycling here.
By the time we packed up and drove home, it was about dinnertime, but I still managed to get in the shop and start working on the small mountain bike. 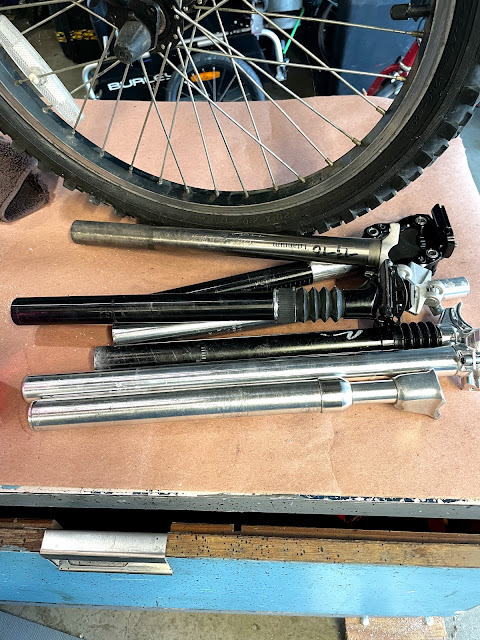 I hit a snag early on when I discovered I didn't have the right size seatpost in my parts inventory. I needed a 34.5 and most of what I own is 27.2. Rummaging brought out every size but 34.5. It's like the Alanis Morrisette song: '10,000 spoons and all you need is...a slightly larger spoon' or something along those lines.

I will keep you posted on this and other builds. In the meantime, remember the following: 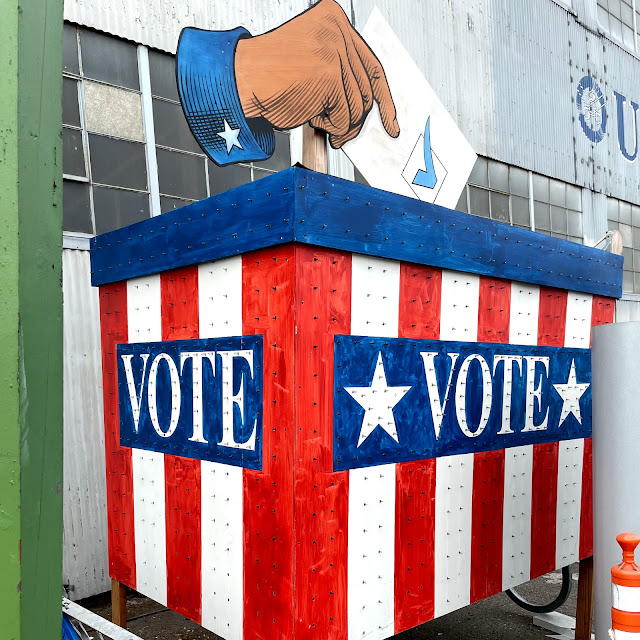