There are some amazing sports around the world. You may love swinging a racquet in tennis, perfecting your putting on a golfing green or perhaps you love scoring a goal in soccer.

While these are great, they don’t get your adrenaline flowing some other activities. If you dream of getting the ultimate thrill, you’ll want to watch or play something a little more exciting. We decided to look at those sports that have a little more danger.

But what are the most dangerous sports in the world? Well, that’s what we wanted to find out. We’ve found the top 10 that are hair-raising, bone-breaking, and terrifying. Let’s see what they are! 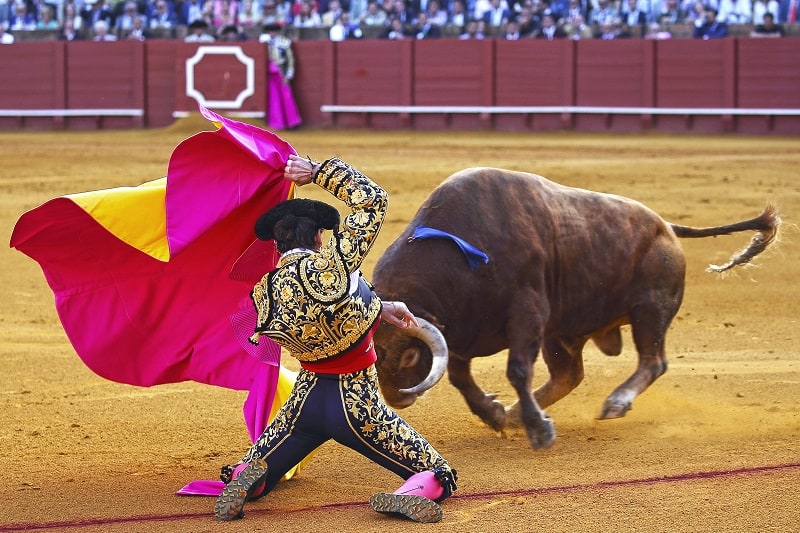 Bulls are big and scary, no matter the angle you face them. Bullfighting is still hugely popular in many countries such as Spain. This dangerous sport involves a professional performer called a matador who “fights” the bull in a sandy bullring.

Entourage members first get inside the bullring and encourage the bull to charge, then throw barbed sticks at it to injure its back. This creates several wounds on the bull, making it bleed.

The matador then flags a red cloth or flag at the bull to make it charge at the fabric and then attempts to pierce its shoulders using a sword to kill it. The attempts can be successful or not, and many matadors have died in a bullring after being attacked.

Matadors also get severe injuries and bone fractures from bull attacks. While highly controversial, the sport is deeply ingrained in some cultures. There are increasing calls to ban it so if you wanted to watch a bullfight, it’s best to do it sooner than later 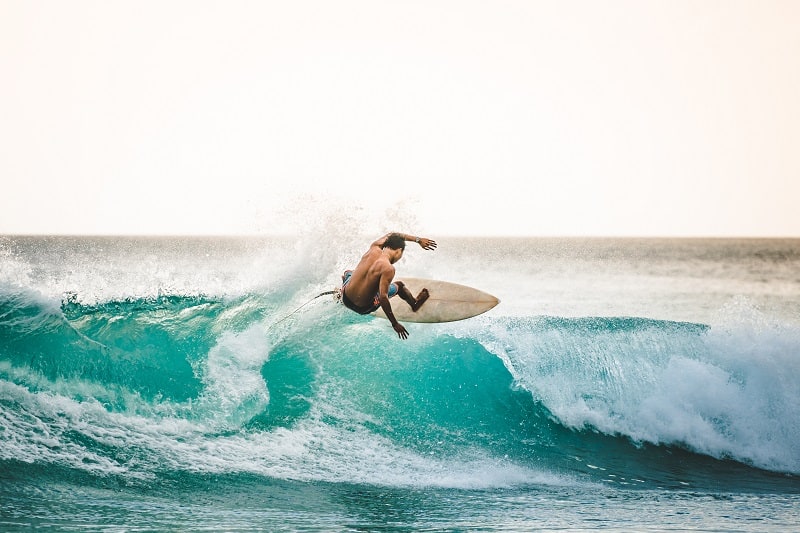 Once you watch the World Surf League, you will wonder how on earth those surfers survive. It is even more interesting to hear them say that surfing, even in giant waves, is not as deadly as it looks. But, the truth is, surfing is a dangerous sport.

Shallow water is very dangerous, so you can imagine how scary even medium-sized waves are. Some surfers get overpowered by the waves and water volume, which puts them underwater for a long time.

Unlike swimming, where you can control your breathing, staying down in the water for a long time will have you desperately wanting to gasp for air. It even becomes worse when the waves come in sets. It means that you cannot rise to get some air because the next wave will push you down.

Many surfers drown from the panic because once the fear of drowning sets in, it is hard to overcome. Although most surfers train by running and swimming in smaller waves, it is still easy to become overwhelmed once that big wave hits.

Experience, confidence, training, and the relative depth of the water are some of the factors that help big wave surfers survive. The nature of the swell and wind conditions will also determine if you will survive a big wave or not.

Big waves are a powerful beast and it takes a lot of courage to ride them. Research has found that on average, 2.36 people per 100,000 surfers die each year. 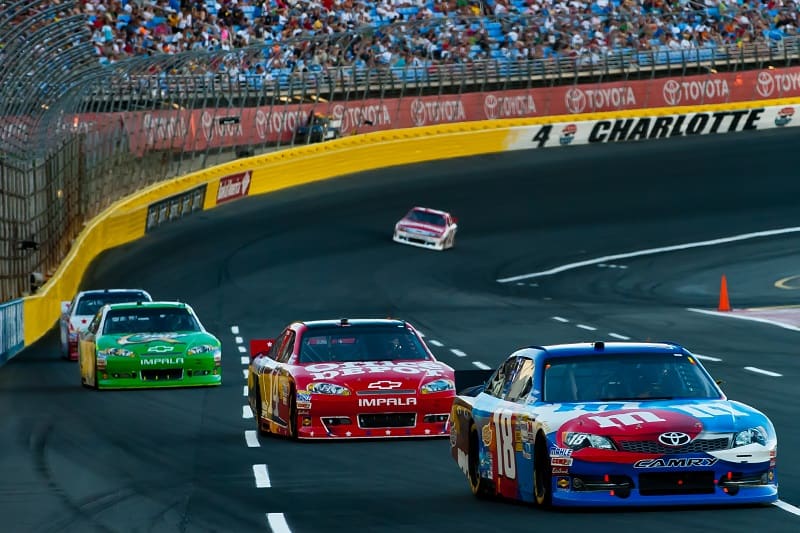 Would you be comfortable sitting in a car that’s hurtling across a track at over 215 mph? That alone sounds scary. There are many different types of motorsport events across the globe and they all have their dangers.

Although car technology is improving and drivers are more secure now, the dangers are still there. Usually, at least one death still happens per year in major motor racing championships. A recent example is Adrian Răspopa in the 2021 Romanian rally championship.

Besides the car’s failure, other factors like weather, terrain, and driver errors can also lead to accidents. Car racers are a different breed of humans as these are dangers they know all too well but still love to race.

Racing drivers protect themselves with fire-retardant suits and helmets, but they can still suffer smashed bones and trauma. While safety features are better than ever, death is never too far away in the world of motorsport.

Street luge is a sport that is not for the faint-hearted. This sport vaguely resembles skateboarding, but the rider uses a luge board in a supine position. They then dash down a road at a very high speed.

Riders are required to wear protective clothing like leather and helmets. The sport is incredibly dangerous because the body is usually very close to the road, and the rider can easily hit the surface.

A simple mistake on the steering can lead to severe bruises and broken bones when the elbows and shoulders hit the road. Crashes also occur when the rider loses control in a corner or collides with other riders.

It is also a popular winter sport where riders race on a track, similar to a bobsled. While they have a track to follow, it’s still extremely dangerous and it’s easy to come off your sled. These dangers were shown by the death of Nodar Kumaritashvili in his final practice before the 2010 Winter Olympics.

As with all of these sports, it’s important to build up a good level of experience before fully challenging yourself. The luge requires huge bravery as you have minimal protective equipment to save you from a crash. 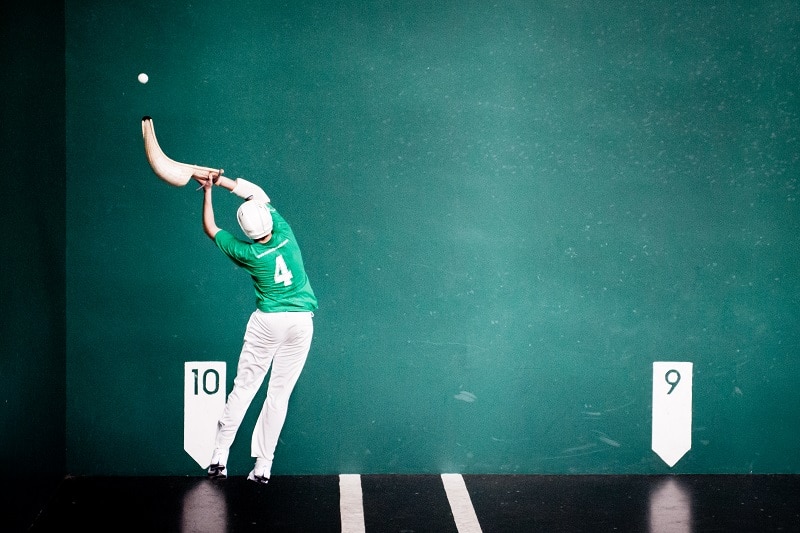 Jai Alai is like an extreme version of squash, though this sport is more dynamic and more violent. Eight teams of two players each play against each other. The game begins when a player hurls the ball at the floor with a large scoop, called a xistera.

The opponent should let the ball bounce back, catch it, and throw it in one fluid motion. A team scores if their opponent does not catch the ball in the air or holds the ball after one bounce. So where is the danger in Jai Alai?

A Jai ball is thrown very far and comes down at a speed of about 186 mph. That wouldn’t be much of an issue if the ball was soft but that’s not the case. Jai’s balls are harder and heavier than a golf ball so imagine getting a golf drive straight to the head!

This intense speed is what causes most injuries. Thankfully players wear helmets but that’s it. If a ball traveling that fast hits your bone, it’s likely going to break. The sport has struggled for popularity in many places and that’s probably because it’s so dangerous. 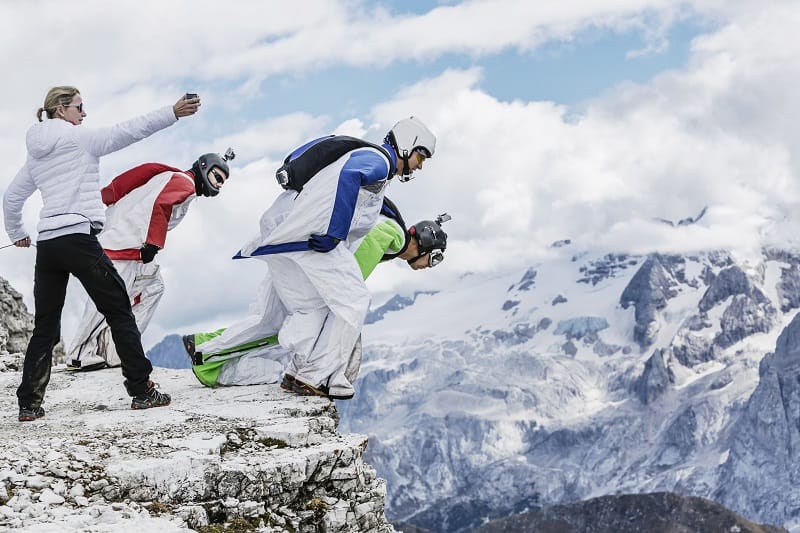 If jumping off moving airplanes that are over 15,000 feet above the ground looks scary to you, then base jumping is even worse. It’s not for the faint-hearted but we humans keep pushing the limits and chasing that adrenaline high.

Skydiving is not scary enough for some people, and they have turned to high cliffs and towers to jump from. You’ll often reach incredible speeds and it is much more dangerous than even skydiving. But why is that?

When jumping out of an airplane, you are falling through open sky and there is nothing to hit you. With base jumping, you are jumping off cliff edges and buildings, and therefore you are very close to danger.

There is very little time for you to react to anything that will go wrong. A strong gust of wind can slam you into a building or drag you into a cliff. There is also wingsuit base jumping that involves gliding through the air rather than going straight down.

Incredibly, a study found that around one in sixty base jump participants dies each year. Those figures make it one of the most dangerous recreational sports in the world. 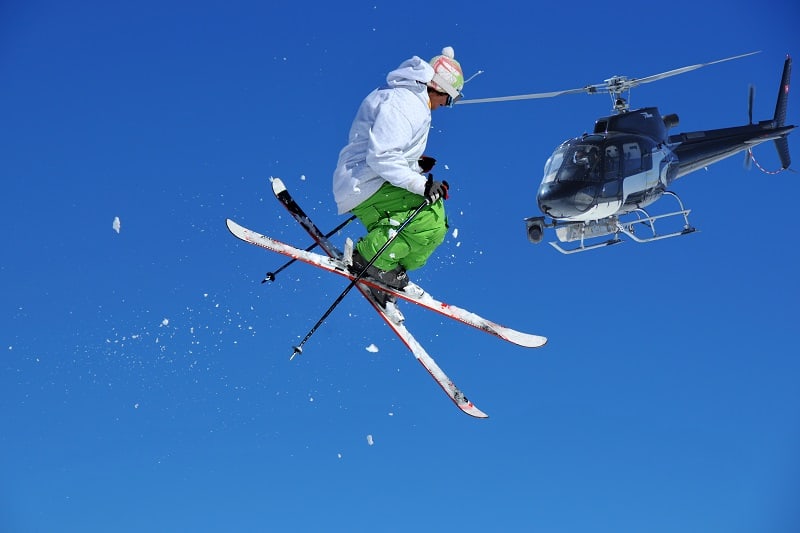 Helicopter skiing, popularly known as heli-skiing, is off-trail, downhill skiing accessed by helicopters. In most cases, heli-skiing is done on powdered snow or natural terrains like mountains.

The avalanches occur suddenly due to natural forces or people traveling through the terrain. This is due to the skiing occurring in areas that are not marked, inspected, and controlled for avalanches. Due to this, it needs to be done with a huge amount of caution.

Many skiers like “off-piste” skiing where you go beyond the marked and control runs. While this has increased dangers, this is usually not an issue for experienced skiers as they are not in overly dangerous areas.

Heli-skiing takes it to the next level. There are many things that go wrong and if they do, rescue can be very challenging. The weather can also change very quickly but some people will do whatever they can to chase that thrill. 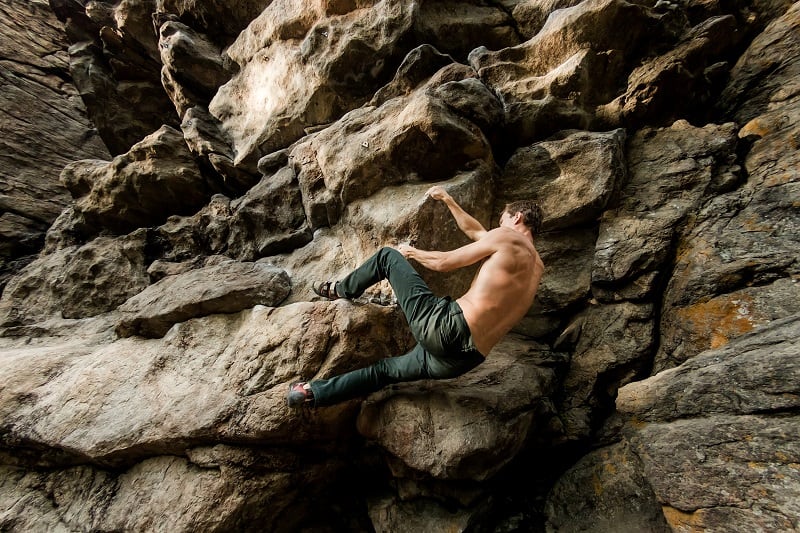 In most of the sports we’ve looked at, mistakes aren’t always a big deal. With free solo rock climbing, one mistake is most likely going to be fatal. Lose your grip or miss your footing and you’ll be falling to the ground.

As you may have guessed, this is a form of climbing where you are completely “free” from any type of protective equipment or climbing aids. That means no ropes, no harnesses, and no helmets.

If you’re thinking that they must climb close to the ground, the opposite is true. With this sport, you climb above safe heights and use your talent alone to make the climb. Unless you fall at the start, you’re probably not going to survive.

Not many people participate in free solo rock climbing as you have to be an elite level climber to even try it. Deaths are still common which is why you should probably stick to safer methods of climbing! 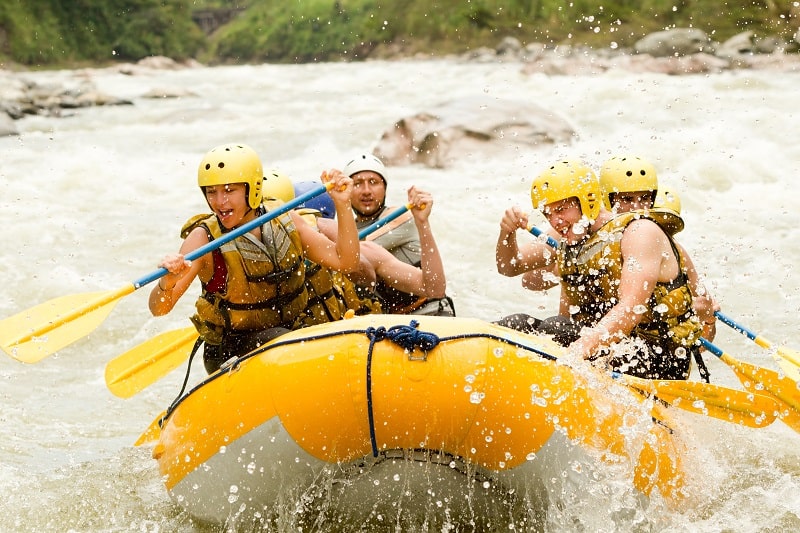 We’ve already seen how water can be a killer with surfing but rapidly moving water can be even worse than big waves. As with many of these sports, a mistake can lead to deadly consequences in the wrong environments.

It’s a sport that can change dramatically in its danger levels depending on the speed of the water, the number of obstacles, and what lies below the surface. However, there are many man-made white water rafting centers that are very safe.

What we’re talking about here is those who head out into the wild and want to ride on top of fast rapids. In these places, a huge amount of experience is needed to not only steer through but also avoid panic.

White water has different classes ranging from Class 1 being the safest to Class 6. Class 6 rapids are those that are extremely dangerous where even experts will struggle. They are best avoided but some adrenaline junkies can’t help to challenge themselves.

The dangers of rapids are generally two-fold. You have the danger of capsizing and being dragged under the water where you can drown. You also have a high chance of slamming into rocks and being crushed. 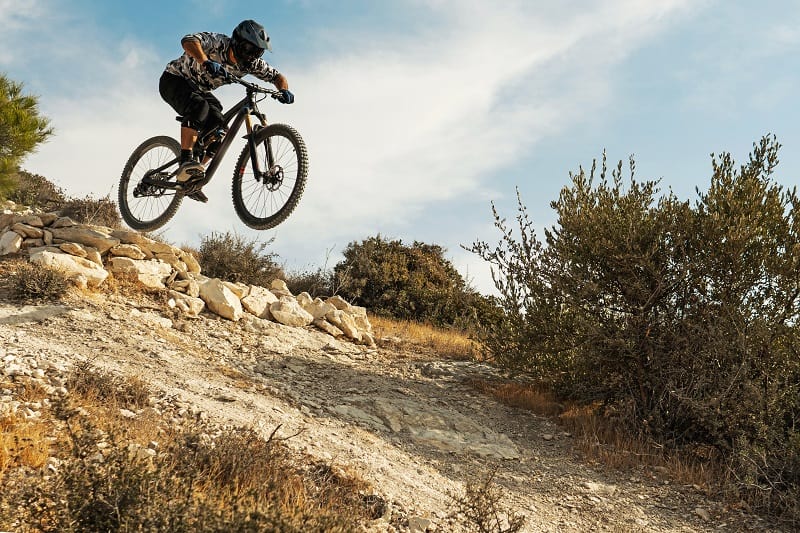 Downhill mountain biking couldn’t miss out on this list as one of the most dangerous sports in the world. As with white water rafting, the dangers dramatically change depending on the environment you’re in and how committed you are.

There are mountains you can ride down safely, relying heavily on your brakes. For other riders, they simply love the thrill of trying to get down a steep mountain as quickly as possible, even if that means leaping over obstacles.

Of course, the term “mountain” here is very loose as the sport generally encompasses any downhill off-road riding over rough terrain. The dangers are obvious as there are many things that can knock you off your bike, such as loose gravel, branches, and rocks.

Due to the steep terrain, you may be falling a long way before you come to a halt. All of this is done with minimum protection. It’s not for the faint-hearted and is another amazing, yet dangerous, sport.

See more about - 10 Famous Sporting Events Every Man Should Experience

The post The 10 Most Dangerous Sports in the World appeared first on Next Luxury.