There’s nothing that says August like a trip to the lake, deep in the woods, with the sounds of the birds chirping and the jet skis roaring. This is what the American summer used to be all about, before the info-heavy era of FYIs, 411s, and FOMO took over.

The art form that is lakefront vacationing is not all lost, though. In fact, many spots are just as supreme as (or even better than) how they were left when almost forgotten decades ago.

In the midst of the pandemic restrictions, when summers have given more leeway by chance, people began to vacation like their parents did, lakeside. From here, the tradition of a Fourth of July or Labor Day “up at the lake” has again gained the nation’s attention.

We’ve got 10 of our favorite American lake towns, some contemporary and others time-honored traditions. 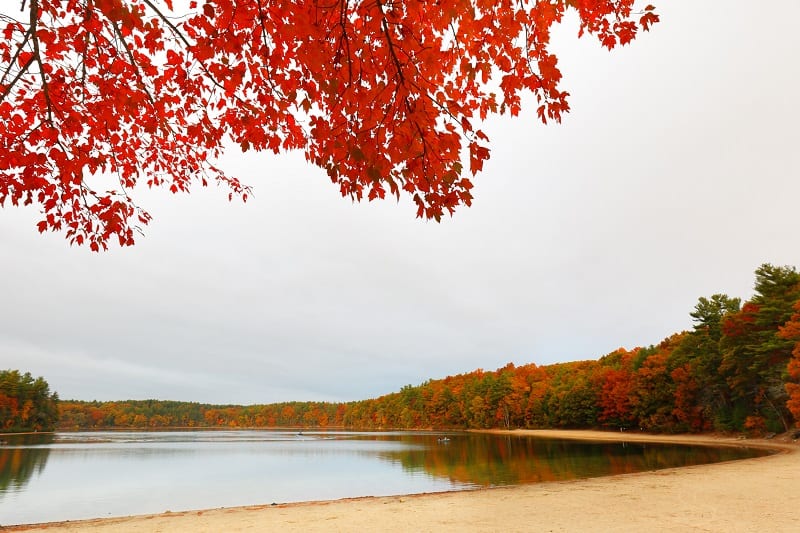 Technically a pond, not a lake, Walden Pond is arguably the birthplace of the American notion of getting away from it all for some time at the lake. Fans of American literature will remember this as one of the quintessential places of transcendentalism, a movement that brought together poetry and the divine notions of nature. It was here that inspired Walden (1854) by Henry David Thoreau.

In Thoreau’s era, the lake house retreat was a symbol for solitude, independence, and the natural good of man while surrounded by the earth’s bounty. Although it sounds trite today, it was an honorable concept at the time, perhaps the birthplace of an American tradition: the summer trip to the lake to unplug. Why not get back to our roots, where it all started?

Near Boston, the retreat is within modernity’s reach. Visitors remark that the land near Walden Pond still has that 1850s vibe to it. On the calendar for activities, travelers will find swimming, canoeing, and fishing as options. Hiking of course is a must. Use a local program to steer your course.

Lodging: Check out the North Bridge Inn, recommended for work, play, and families. 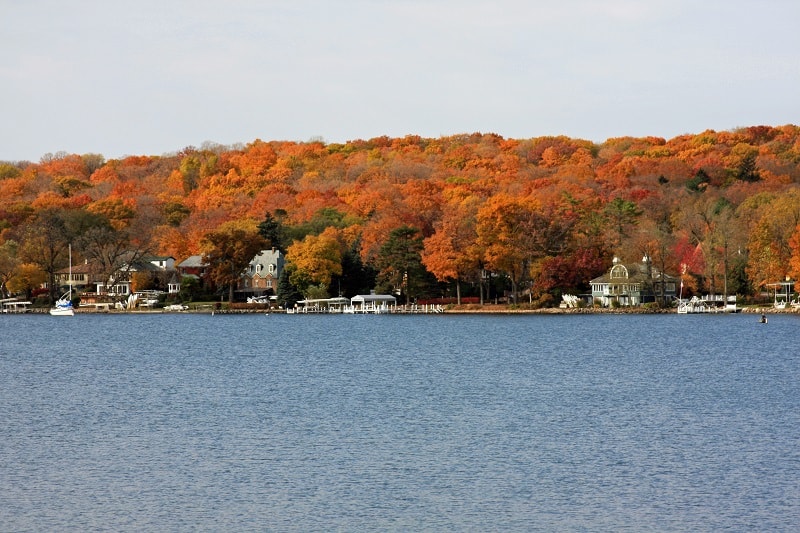 About an hour and a half from Chicago and 45 minutes from Milwaukee hides a tiny Wisconsin resort town that’s a hidden gem in its own right, Lake Geneva. Many Chicagoans still flock to the north in the winter for skiing and sledding, but the summer season brings out people from all over for boating, fishing, and sightseeing.

The city got its start in 1836 and later became known as the “Newport of the West” because of all the rich people who hailed from Chicago who summered there. In fact, after the Great Chicago Fire, many came to live in their summer home year round.

The historic architecture is what lends the surroundings such a quaint ambiance reminiscent of small towns on the East Coast. Boating is a must, and plenty of farm life charms sneak up on the revelers while browsing the markets in town. With the city life not too far out of reach, it makes sense for those who like to summer under the radar but not completely off the grid.

3. The Buzz Around Indiana’s Winona Lake 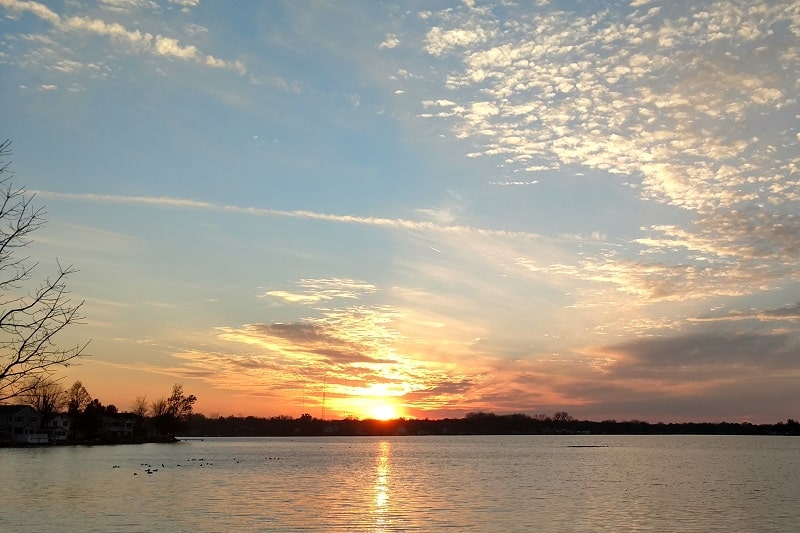 Winona Lake in Indiana earns the third spot on our list, specifically as it’s gaining popularity these days. People come for the events and recreational opportunities, but they stay for shopping and restaurants.

In Northern Indiana, Winona Lake meets the shores of the Village at Winona. It’s a town with strong ties to history as a summer getaway turned shopping center. The experiences bring together the best parts of dining and entertainment.

Throughout the year many events take place, giving the Village that special edge that keeps the crowds coming back for more. The activities here are standard; biking, hiking, and walking the greenway.

Shopping and dining are staples as well, and the cherry on top is how many establishments are locally owned. Try timing your stay with one of the seasonal standards like Fat and Skinny Tire Fest or Art Fair. 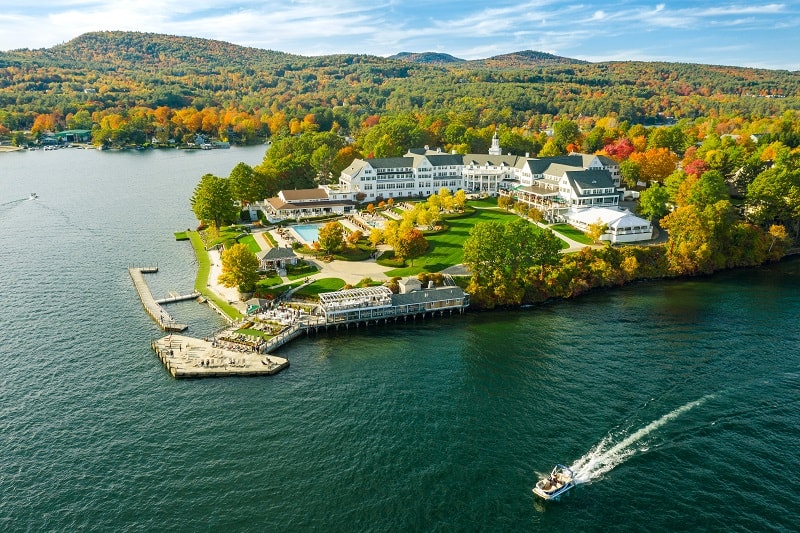 In New York, Lake George stands out as a family vacation classic for many who will recall long road trips to the destination. Once known as the Queen of American Lakes, Lake George finds itself near the Adirondack Mountains in New York.

187 feet deep, this lake draws in crowds of over 50,000 people to Lake George each summer, much higher than the year round population. There are plenty of hotels that provide stunning views of the lake for those with the patience to shop around.

Hiking the mountains, swimming, and a local amusement park make the lake an exciting place to spend a couple of days. If you’re up for something a little more death-defying, you could try parasailing over the lake. 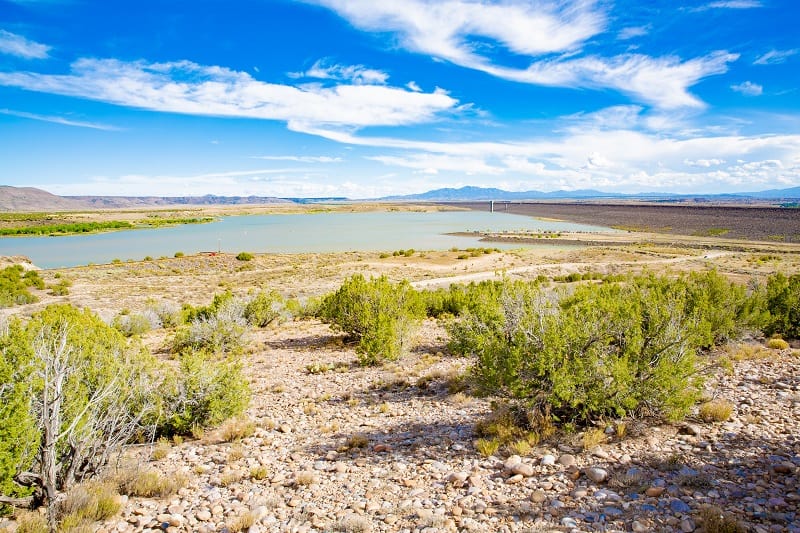 In New Mexico, the Cochiti Recreation Area in Sandoval County sits alongside the Pueblo de Cochiti Indian Reservation. In the area, there are two public recreation areas. On the east, Tetilla Peak. On the other end is Cochiti.

There’s a large earth-fill dam, one of the biggest in the country, to admire as well as the rich history of the Pueblo on the Cochiti Reservation. If you’re the curious type who likes to collect new facts when out on the road, be sure to hit up the visitor center for an array of educational materials.

Pack a sandwich because this is more of a picnic place than one where there are dozens of lakeside restaurants. Locals remind visitors that the lake is always low to prevent floods. Bring your binoculars too, they suggest, to catch a sight of the wildlife. It’s common to see deer, coyotes, and beavers out in the landscape.

See more about - The 10 Best U.S. Cities To Visit Now We Can Travel

6. The Five-County Lake in Tennessee 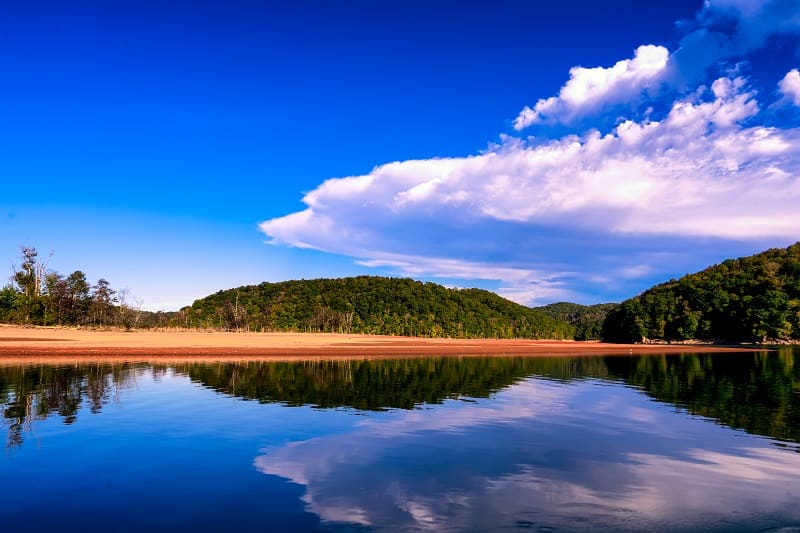 Norris Lake has been capturing some attention lately amongst lake life lovers. It’s the kind of place families and friends head for days composed of fishing, water sports, and soaking up the sun.

This sizable lake offers 800 miles of shoreline and crosses through five counties, so choosing the right spot on the lake can be kind of daunting. Just remember that a lot of happy campers have appreciated Big Creek and Davis Creek.

On the lake, vacationers will enjoy kayaking or paddle boating. Wakeboarding is also on the menu as is making time to catch out the insane stunts these pros pull off on the water. Fishing fanatics will spot 14 species of fish, but it’s usually bass that comes up from April through June.

If you’re new to fishing, just hire a local guide. They know all the secret spots to catch a big one. You’ll have to register for a fishing license in the state, but it makes for a fun souvenir. 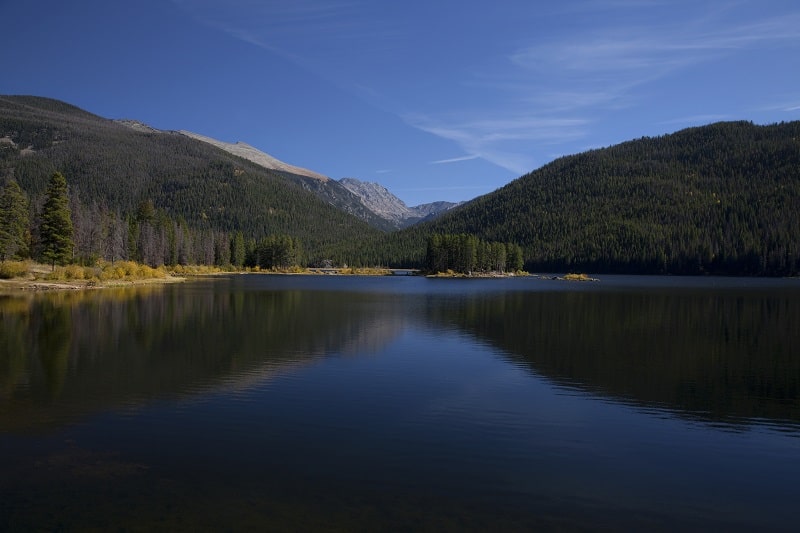 We’re pretty sure that most, if not all, lakeside towns and camps in Colorado are beautiful, but one has pulled ahead of the pack this summer, and it’s Monarch Lake.

Of the 4,000 bodies of water in Colorado, the state in general offers many chances to enjoy the best in sailing, boating, fishing, and a variety of water sports. In the winter, ice fishing is a whole other ball game. Conveniently, some options aren’t far from Boulder or Denver.

Monarch Lake differs because of its grandeur, a hallmark of the picturesque camp in the Indian Peaks Wilderness near the Rocky Mountain National Park. It’s a four-mile loop, making for a fun but manageable hike where lush meadows help the weary traveler reconnect with nature.

Bring your camera to grab some once-in-a-lifetime shots of elk, deer, and other woodland animals. If you’re into fishing, there’s plenty of trout to go around (fishing license required). The small town of Granby, Colorado is nearby, making for a good place to hang your hat at the end of the day. It’s become more popular as of late, especially with folks driving out from Denver, so be sure to book your arrangements in advance. 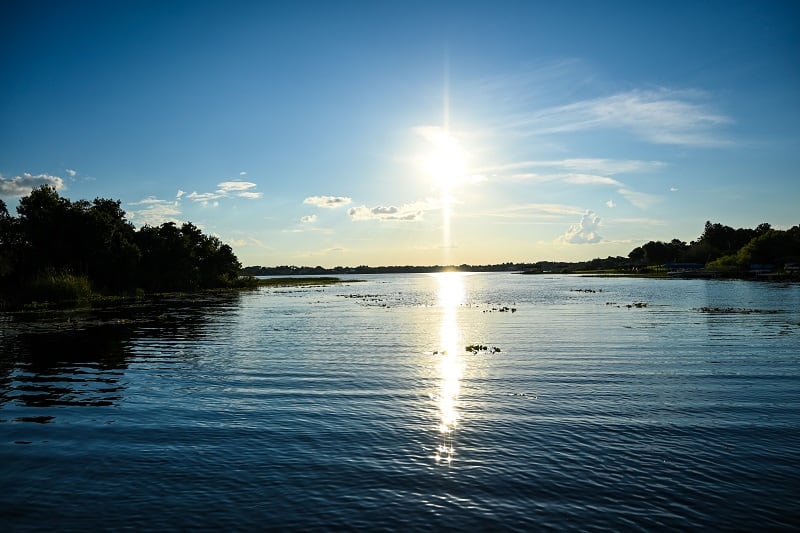 As great as the beaches are on both the Gulf and the Atlantic sides of Florida, there’s one place that always pulls in crowds, Lake Butler, Florida. In Northern Florida, Lake Butler is the picture of perfection, a town centered around a one-mile-wide lake. Its claim to fame is a bass fishing tournament that brings in the people in droves.

A community park makes the lake accessible to the public in the shape of playground equipment, grills, a boat ramp, and a local community center. Bikers enjoy the 47-mile-long trail. Grab an Instagram selfie in front of the county’s courthouse (with a stunning wraparound porch) which sits in front of the lake. They’ve even got their own iconic pizza joint in town.

In a town as nice as this, however, you may be craving something a little more extravagant, like Lobster. Located about 40 minutes away from Gainesville, FL, modern amenities are a stone’s throw away.

9. Soaking It All In At South Lake Tahoe, California 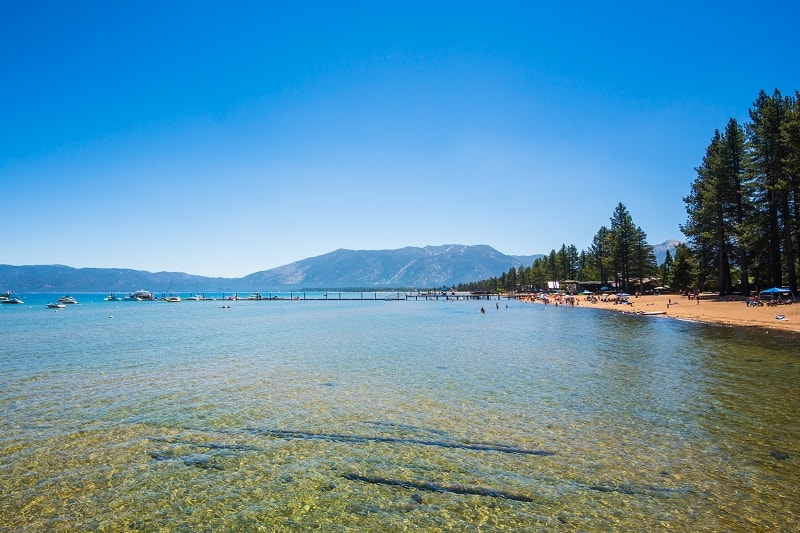 South Lake Tahoe is a resort destination on Lake Tahoe in California. The Sierra Nevada mountains surround it, making it popular in both skiing and beach seasons. On the Nevada side, the casino life offers a little late-night entertainment.

No trip is complete without a tour of the 1929 mansion known as Vikingsholm (Nordic-inspired) in Emerald Bay State Park. The climax of any trip to South Lake Tahoe is a visit to Emerald Bay. It’s to the south of the body of water, offering panoramic perspectives that make the drive along highway 89 worth it every time.

If you were to ask around, you might hear some people say the north is the better Tahoe. To each their own, but we prefer the artsy vibe Tahoe South has been putting out for some time now.  Those with upscale tastes will revel in the luxury afforded by stays in Heavenly Village and South Lake Shore. 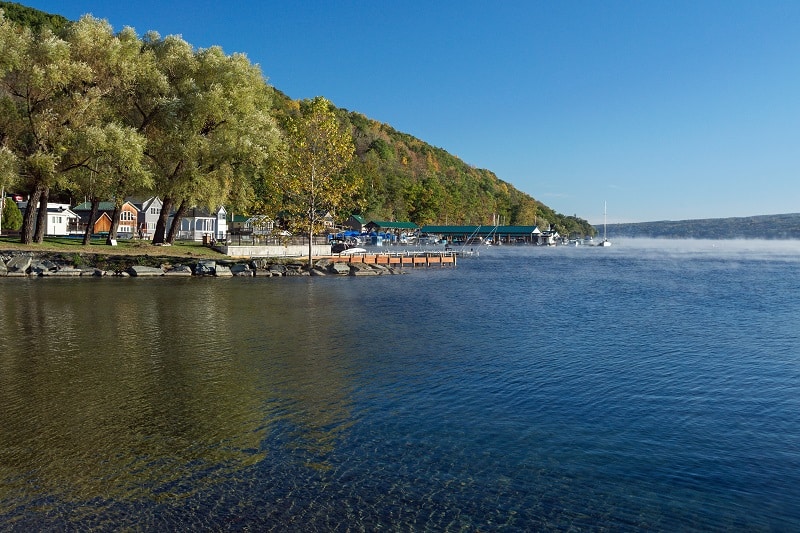 The Finger Lakes consist of a series of lakes in New York that runs north-south, draping over the landscape like fingers. Last but not least on our list, the Finger Lakes offer some of the nation’s top wine tasting experiences in Upstate New York. Most know that this part of New York produces the East’s best wines. It’s a veritable wine-tasting hotspot on Highway 414.

Some of the wineries hold prime real estate on the lakes, meaning that lakeside tastings are a reality. In Ovid, the Thirsty Owl is popular. Even if you can’t make it out to the lake this summer, you can still order bottles of their wine online.

If you’re not into vino, you can enjoy other alcohol-fueled adventures at a variety of hard-cider places, breweries, and distilleries. If you’re planning a family-style lake trip, Finger Lakes fits the bill. Around the area, there are plenty of museums (great for rainy days). The Glenn H. Curtiss Aviation Museum sounds pretty cool. He was a pilot and motorcycle record holder for speed for 23 years.

Everything that one would expect at the lakeside is offered as well. Hobbyists will be happy to take refuge on the trails where they can hike or bike. Those who love to fish or boat will also fit right in.

Some people travel with the intention of visiting waterfalls, and even that’s an option in the Finger Lakes Region where a gorge trail offers 19 of them at the Watkins Glen State Park. In the park, there’s a boat tour on Seneca Lake. Cruises and dining options are available on many of the lakes including the Skaneateles and Cayuga.

From the Finger Lakes all the way back to Walden, the nation’s lake towns are worth touring this summer. Thoreau said it best: “We can never have enough nature.”

See more about - The 12 Best Beaches To Visit in the U.S.

The post The 10 Best American Lake Towns To Visit This Summer appeared first on Next Luxury.