Are you looking for hotels with Peloton bikes in San Antonio, Houston, Dallas or another Texas city? What about a vacation rental in Galveston or Austin? This blog post can help.

This article on Texas hotels with Peloton bikes grew out of a bigger post about hotels worldwide with Pelotons in them. I first wrote that post in 2019. Since then it’s grown to be huge.

Why write about Texas hotels and rentals with Pelotons

Before I started breaking out these posts by region, that Peloton hotels article was 14,000+ words. That’s just too long for anyone to read. So, I’ve taken the information from that post that refers to Texas hotels with Peloton bikes and put it, below.

The Austin Proper Hotel is part of the Marriott Design Hotels group. Technically, it is a hotel and residences.

It’s hard to tell just how many Peloton bikes are at the Fairmont Austin. But at least you know the hotel has them, if you’re traveling to Austin, Texas.

A friend told me she recently stayed at the Omni Barton Creek Resort in Austin and loved that the property had three Peloton bikes in the Barton Creek Fitness Center.

The Westin Austin at The Domain

According to the website of Westin Austin at The Domain, there is one Peloton bike in the hotel gym aka The Westin Workout Fitness Studio.

When the Westin Austin Downtown hotel in Texas shared on its Facebook page about the addition of a Peloton bike, they called it a “workout with a view.” That is a nice view in the picture, below.

It appears that the pedals have toe cages–meaning you won’t have to worry about cycling shoes with cleats compatible with Peloton. You just slip your sneakers or workout shoes into the cages to pedal.

The W Hotel in Austin, Texas, refers to Peloton bikes in the hotel gym in the plural!

The Westin Austin at The Domain

Austin is technically a college town. So, I’ve included it in my blog post about college towns with hotels that have Peloton bikes.

Of all the cities in Texas with hotels that have Peloton bikes, Dallas has the most of them. This includes the DFW Airport and greater area.

The Adophus Hotel is part of the Autograph Collection within the Marriott family. So, a boutique-feeling hotel in Dallas with a big brand behind it.

Two friends recently stayed there on business. They confirmed that there is at least one Peloton bike in the fitness center or hotel gym.

There are two Peloton cycles at the Hall Arts Hotel, part of the Hilton Curio Collection. The hotel gym and fitness center is located on the second floor of this Dallas hotel.

I just got an email announcing the opening of the Kimpton The Pittman Hotel in Dallas. It’s in the Deep Ellum neighborhood of the city.

And, good news: the hotel’s website says there are multiple Peloton bikes in the 24/7 fitness center. Even D Magazine’s write up about the new lodging space included a mention of the Pelotons!

The Peloton bikes at the Le Meridien Dallas, The Stoneleigh must be brand new. Why?

Because a Facebook friend who recently stayed there was told the hotel didn’t have a Peloton. But, lo and behold, she found one in the fitness center. It’s next to the Life Fitness ab machine.

See her picture below, which she gave me permission to share here. She tells me there is a second bike, too. 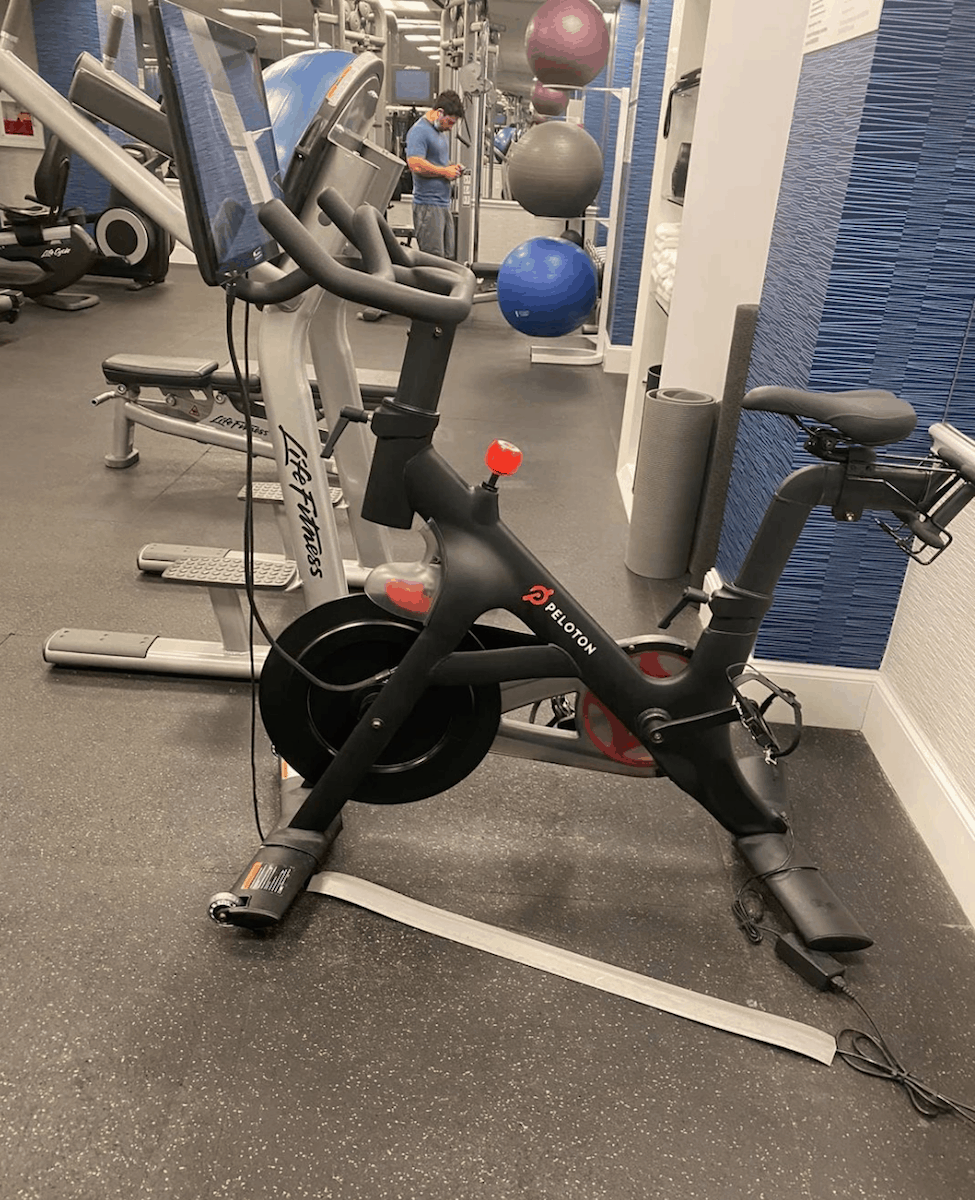 A friend tipped me off that there are Peloton bikes at the Omni Dallas Hotel. Wish they’d been there in Fall 2017 when I’d traveled to Dallas on a business trip.

I stayed at the Sheraton Dallas Hotel a few years ago. I had to use my phone and the Peloton app to do classes on the hotel gym’s regular spin bikes and treadmills.

Thankfully, if I get back there, I won’t have to use this Peloton hack. I just learned that the hotel has five Peloton bikes in the gym.

In a September 2019 Instagram post, the Stanton House El Paso in Texas announced that it had added a Peloton bike to the hotel gym. 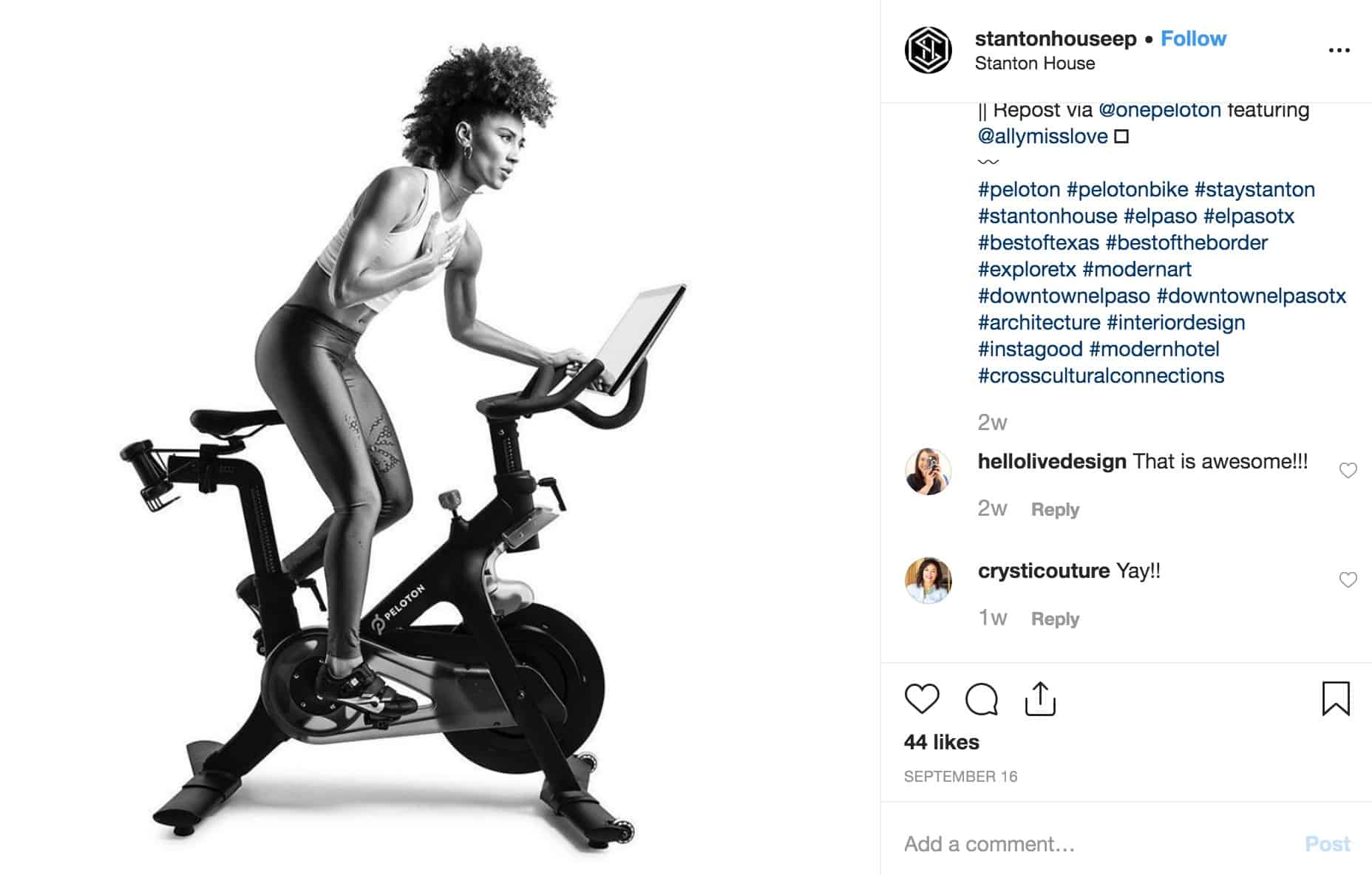 Thanks to the hotel’s Instagram feed, I was able to discover that the Westin Stonebriar hotel has Pelotons in multiple places on the property. One, you can book a room with a Peloton bike in it. Two, you can workout in the hotel gym, which has four Peloton bikes in it.

You will find one Peloton bike at the Gaylord Texan Resort & Convention Center. FYI, Gaylord is part of the Marriott hotel family.

From reading reviews on TripAdvisor, it seems like the Houston Airport Marriott at George Bush Intercontinental airport in Texas just recently added Peloton bikes to its fitness center.

In addition to Lululemon accessories in the fitness center, the Post Oak Hotel at Uptown Houston promotes that it is one of the hotels with gyms with Peloton bikes in them. Two Peloton cycles, to be specific.

Just outside Irving and situated between Dallas and Fort Worth, the Four Seasons Resort and Club Dallas at Las Colinas Texas has one Peloton bike in its expansive fitness club and hotel gym.

The Grand Hyatt DFW Instagram announced that this airport hotel has added a Peloton bike to the hotel’s “Stay Fit Gym.” However, a review on TripAdvisor said that there are actually two Peloton cycles there.

Located adjacent to Terminal C at Dallas-Fort Worth International Airport is the Hyatt Regency DFW. It has two Peloton bikes in the fitness center, which are featured on the Expedia page here for the hotel.

The Westin Dallas Fort Worth Airport has a WestinWorkout page devoted to the hotel’s partnership with Peloton. Very cool that you have the option of booking a Westin Workout room on the website, which usually means a hotel room with a Peloton in it.

The Hotel Emma seems to be the only hotel in San Antonio with a Peloton bike. However, I could not find anything about the bike on the hotel’s website nor on its Expedia page. On the other hand, this Trip Advisor review raves about the bike. So, I’m including it until I hear otherwise.

This vacation rental on VRBO describes itself as a “luxury French country home with Lake Austin Boat Dock.” While those are nice amenities, to be sure, here’s what you’re really going to love about this five-bedroom, three-bath house: the home has a Peloton Bike + Plus and also a Peloton Tread.

A fellow Peloton devotee shared that her home near Galveston is now available as a vacation rental on VRBO. Her Peloton bike is in front of glass doors that overlook the waterfront location.

The home itself has four bedrooms and three bathrooms, and sleeps 12. It also has an on-site boat slip.

This home in The Woodlands has five bedrooms and 3.5 bathrooms. The VRBO listing heading highlights the fact that this house has a Peloton. When you click through the pictures, you see the Peloton cycle in its own corner in front of a window. 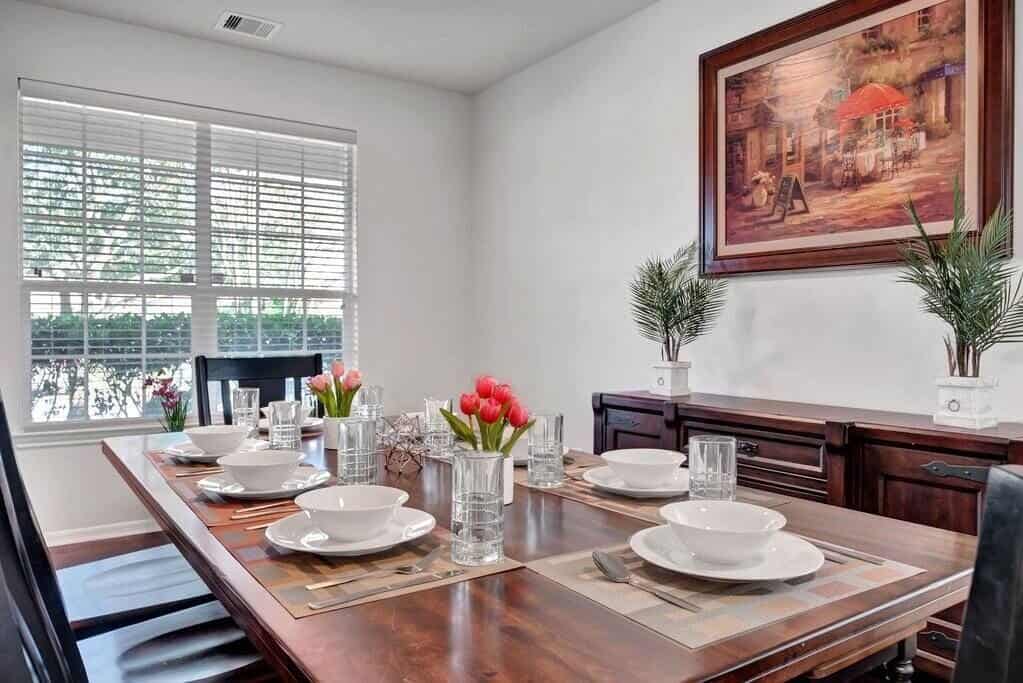 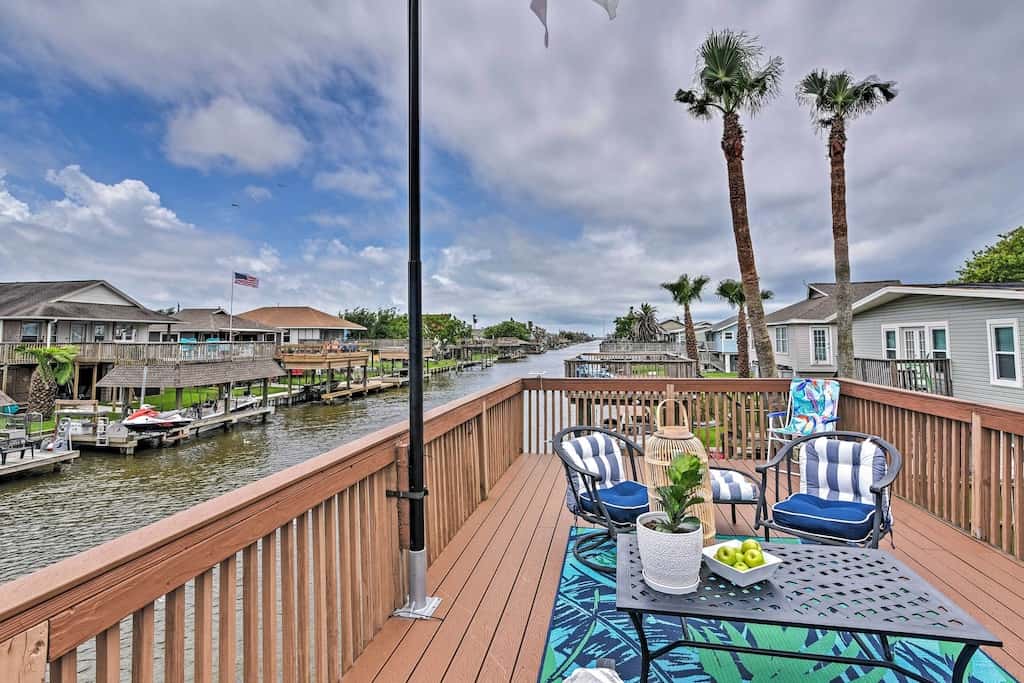 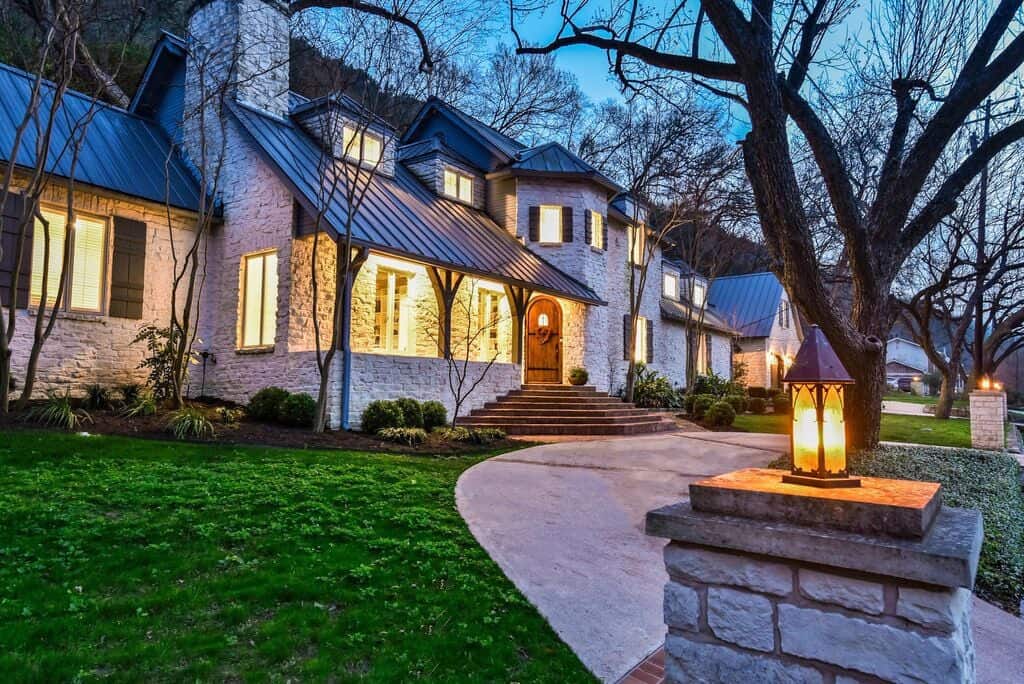 Like all of the hotels with Peloton bikes posts I’ve written, this one on Texas places is a work in progress. When I hear about additional Texas hotels or vacation rentals with a Peloton, I’ll add it to this post.

Similarly, if you’ve stayed at, work for or represent a Texas hotel and there is a Peloton there, do reach out to me. If it’s a good fit, I’ll add it to this article.