JULIA SPENCER-FLEMING: Lately, I've been contemplating the ineffable nature of time, and culture, and the meaning of life. Why are we here? What are we doing? And most importantly, why am I turning 60 in a little over a month?

This headstone milestone birthday has me spinning - first I'm buying heavy-duty face creams, then I'm laughing at "do you remember the 70s" blogs, followed by looking up actuarial tables, and coming back to rest at "60 is the New 40." I certainly feel more like 40 than 60 (if I ignore my knees.) 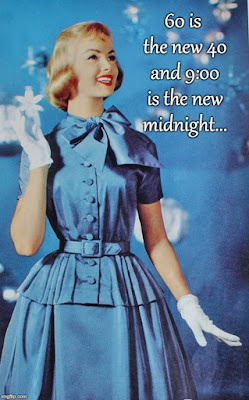 When my mom turned 60, two of her three adult children were married, she had three grandkids with another on the way, and she lived in an "adult only" community. When her mother turned 60, she had sixteen grandchildren, the oldest of which was about to get married and start law school. I'm still waiting for my last child to finish with her bachelor's degree.

The thing that really chafes me about my age (other than the inevitable triumph of entropy) is that my cohort is still defined as "Boomer." Why does that generation label stretch from 1945 to 1965? You know who's the same age as me? George Cloony. Julia-Louis Dreyfus. Barack Obama. And Michelle was born at the beginning of 1964. You gonna call the Obamas Boomers? I though not. 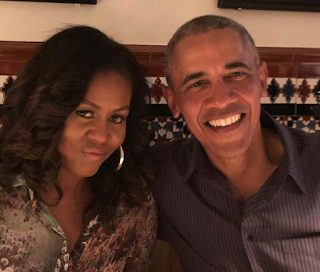 It seems unfair to be saddled with the label when I missed out on all the formative Boomer stuff. Black and white TV? Beatlemania? Howdy Doody? Nope. I was a baby during the Cuban Missile Crisis, Kennedy's assassination, and the early space program. The banner year of 1968, I turned seven, and the only thing I recall about that year was getting to ride my bike - by myself! - to my elementary school.

My college years and young adult life took place in the go-go eighties, with big shoulder pads and feathered hair fighting against ripped jeans and punk rock 'dos. We listened to Culture Club, Joan Jett and the Blackhearts, Elvis Costello and Adam Ant. The big byword was "30 by 30" - ambitious college grads of the class of '84 wanted to earn $30,000 by age 30. (According to the CPI calculator, that adjusts to $63,500 today, which doesn't seem too shabby.)

When I was in grad school (pursuing that lucrative Museum Studies degree - greed is good, baby!) my cousins who had been born between '45 and '55 had spouses, mortgages and kids. These were people who had to duck and cover when they were kids - but for me, the Cold War was over by the time I was 28. (Does anyone remember how it was going to be "the end of history?")

Look, I don't want to step on any Gen X toes. I hear you 41 to 56 year-olds grumbling that no one remembers you. But I also don't want to say, "I'm a Boomer" and have everyone assume I danced the Watusi and wore a miniskirt (although Hank's lavender hot pants wedding outfit kind of makes me wish I hadn't missed that stage.) I just want a label that reflects the culture I and my good friends George and Barack grew up in. Maybe "Generation Reagan," since the Teflon President loomed so large in our lives. Maybe "The Punk and Preppie Peers." 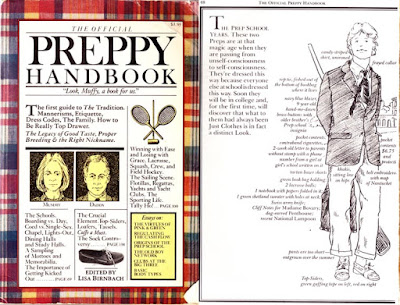