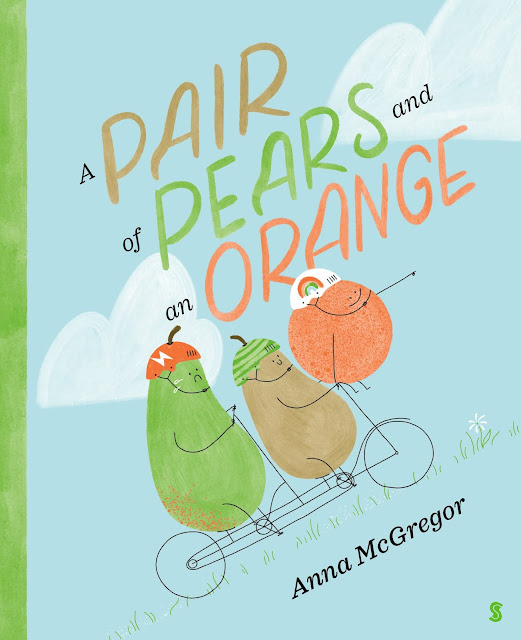 There's a saying that two's company, but three's a crowd.

In A Pair of Pears and an Orange, however, although three may seem a crowd, there's a positive message about making friends and learning to work and play together.

They play table tennis, have fun on playground equipment, and ride a tandem bike.

So when someone new shows up, and they are asked to make room for a third, Big Pear isn't as certain as Little Pear about welcoming a new friend.

Orange's presence changes things. The games the two pears used to play together don't work as well with three of them, and Orange doesn't seem aware of the impact he's made.

When Big Pear decides to join new friends, a group of three peas, she doesn't really fit in and realises that she's missing both Little Pear and Orange.

Returning to her friends, Big Pear is able to bring with her some new games they can all enjoy.

Anna McGregor has both written and illustrated A Pair of Pears and an Orange. It's a unusually humourous tale of the dynamics of friendship, sharing, and problem solving.

Depicting the characters as different fruits, will not deter children from identifying what's going on, and adds a quirky element to the story, both in the pictures and the playful text.