Theres a particular feeling of liberty that comes with being able to hop on a bike from a city apartment and ride directly to a campsite far from the bustle, surrounded by lush greenery and a river, in just a few hours. The Chesapeake and Ohio Canal towpath, or C&O Canal Towpath, which connects Washington, D.C. with Cumberland, Maryland through 185 miles of flat trails perfect for biking, allows you to feel just that.

The leafy path winds its way between the old canal, once used to ship coal from the Allegheny Mountains to the west, and the Potomac River on the other. The path also doubles as a national historical park known to hikers, joggers and commuters from the city as underrated for its easy, accessible bike-packing and camping. 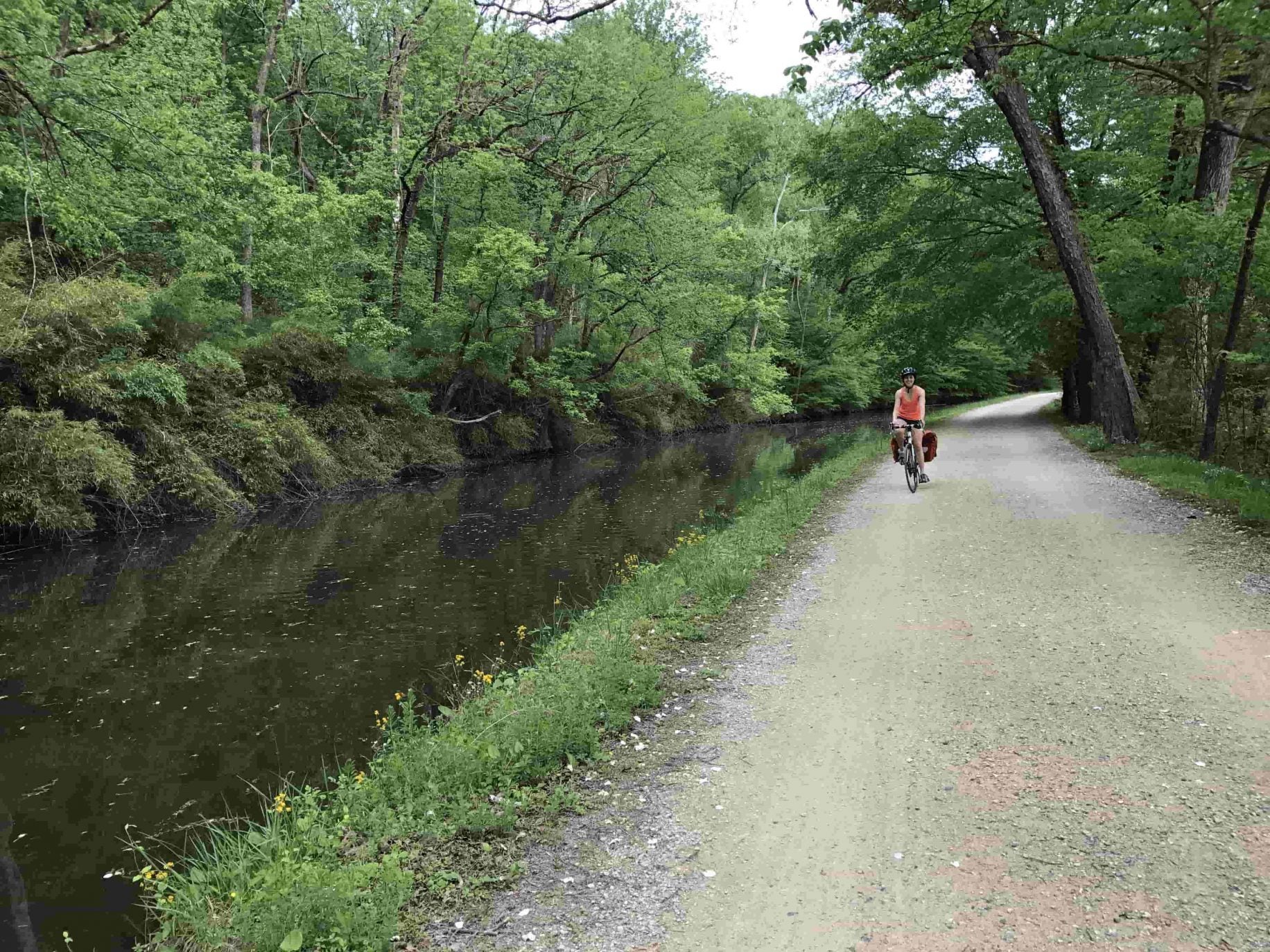 Most can do the entire C&O Canal towpath from D.C. to Cumberland in around five days, an appropriate pace even for kids. From Cumberland, ambitious bikers can keep going to Pittsburgh on the Great Allegheny Passage, for a full 300 miles of bikepacking. If you just have a day or two, the C&O Canal towpath also makes a great out-and-back adventure.

How to Camp within Biking Distance from the City 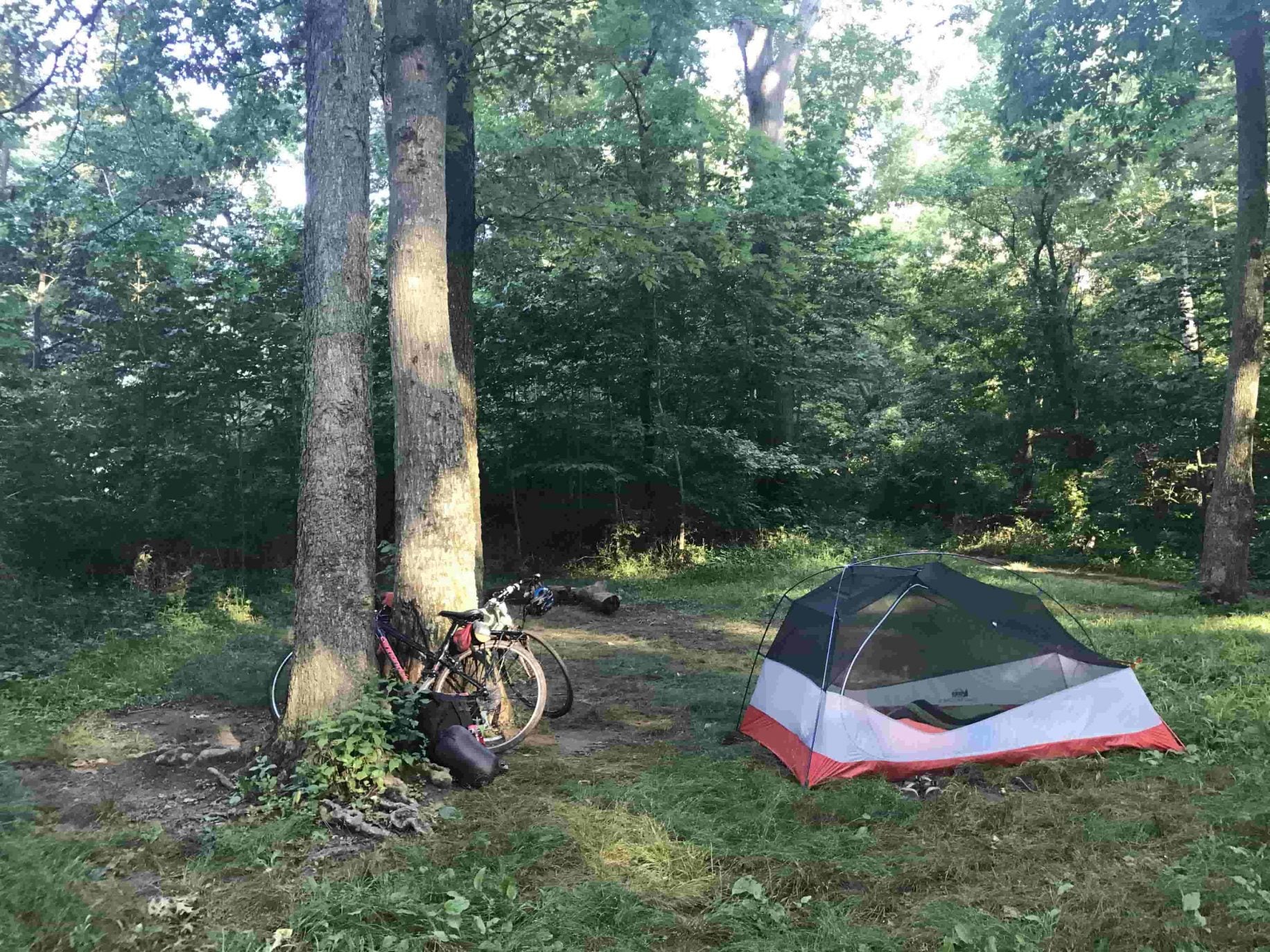 The C&O Canal towpath offers many bikepacking sites, with two general types: tent and primitive RV campgrounds, which are car-accessible and usually come with a fee and a reservation,and hiking-biking sites, which are accessible only to hikers and bikers on a free, first-come, first-served basis. The first one of these is Swains Lock at mile marker 16, which has nearby vehicle access. Others are far more remote.

Weve collected some of The Dyrt campers favorite campgrounds on the C&O Canal towpath:

Bike Washingtons C&O Canal Bicycling Guide maintains a good list of private, hiker-biker and drive-in campsites along the trail. Check out the website for mile-by-mile recommendations for food and detours too.

The hiker-biker campsites all offer a fire-pit, picnic table, water and toilets, although the water isnt always completely potable, so bring iodine tablets. The campsites are maintained by the National Park Service every 10 miles or so along the trail. Five to ten people can stay at each, and they rarely if ever get full.

From historic Georgetown in D.C., the towpath takes visitors to the turbulent Great Falls, the picturesque drop point for the Potomac River on its journey to the Chesapeake Bay. After that, the trail gets more lonesome, with herons and deer for company, as it winds its way to Whites Ferry, then Harpers Ferry and on to Cumberland. Cute Maryland towns are always nearby, with creameries and breweries for a quick refresher. 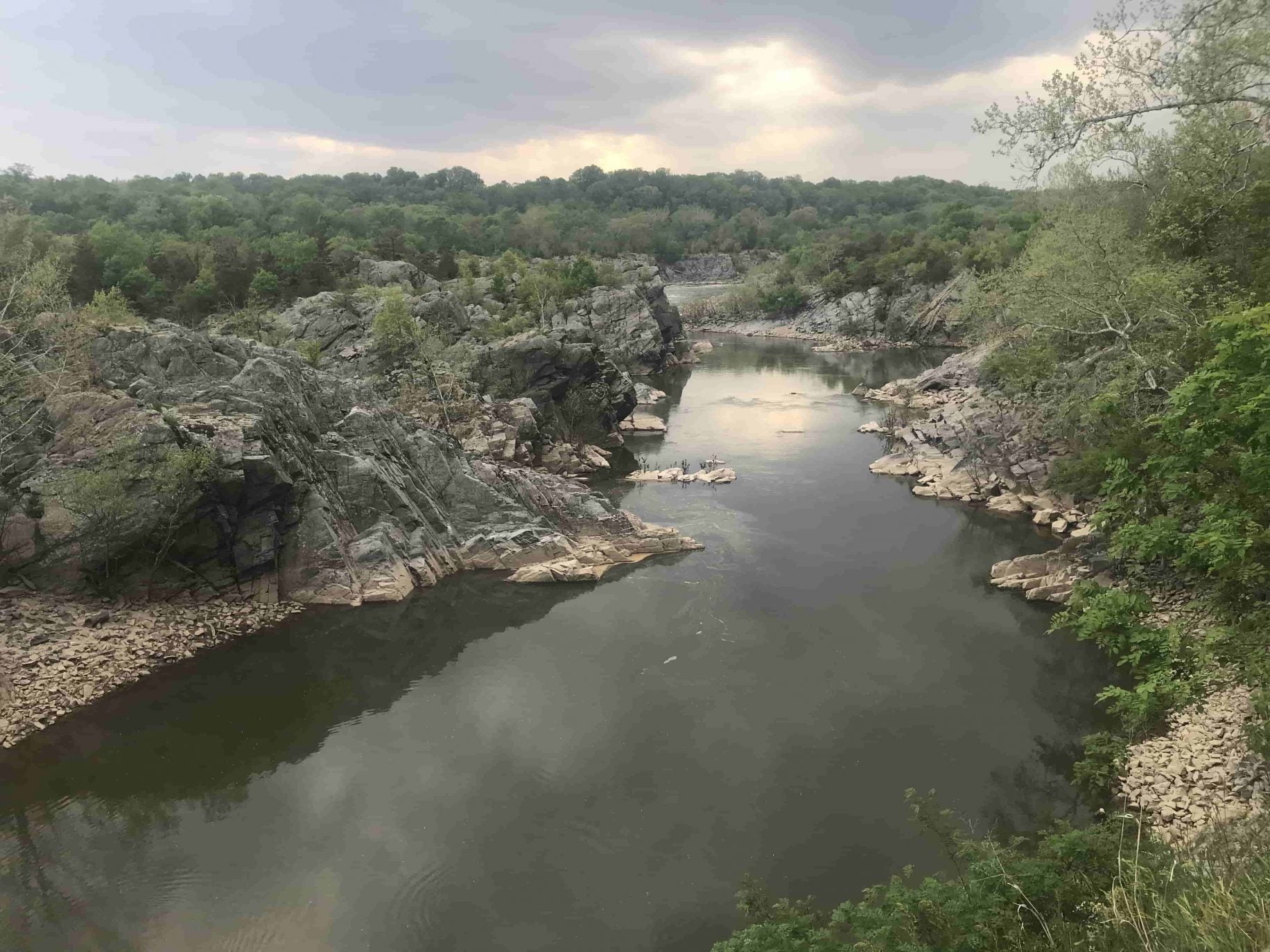 Image of the Potomac River near Great Falls, Maryland from Camille von Kaenel

Heres what you should keep in mind when going bikepacking on the C&O Canal towpath. 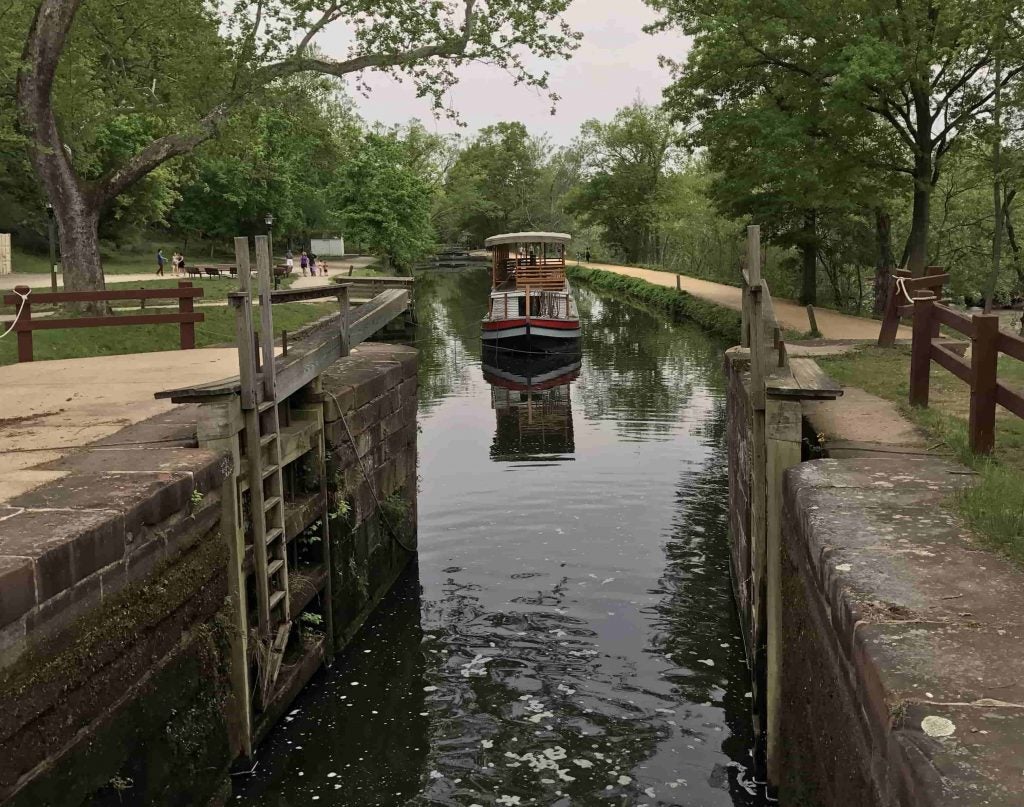 The C&O Canal and its towpath were built in the early 19th century. It was used primarily to bring coal from the Allegheny Mountains to Washington D.C. and provided jobs to people living at both ends and along the banks of the Potomac River. The National Park Service took over in the 1960s to develop the towpath into a bike and pedestrian way and preserve the many historic lock houses, locks and aqueducts. There 74 historic and picturesque locks along the trail, in various stages of preservation.

Today, there are interpretative signs all along the path, and theyre worth stopping at. You could learn about the women who rented out rooms and sold meals at the Great Falls Tavern Hotel in the early 20th century. Or learn about the 12 x 12 cabins dotting the path, the ones that canal families would live in during the five- to seven-day journey from Cumberland to Georgetown centuries before, in harsh and sometimes fatal conditions. 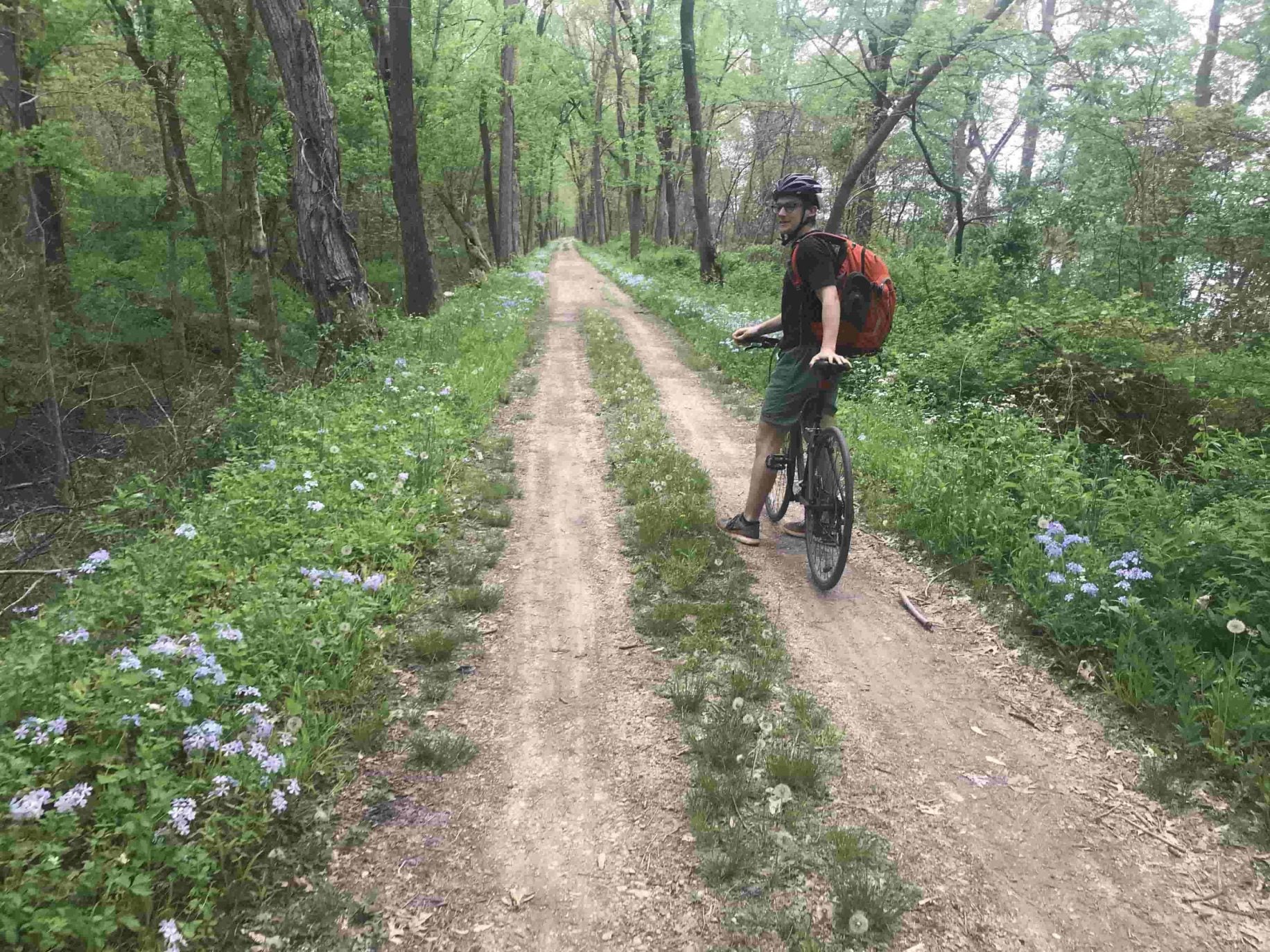 Ditch backpacks and road bikes, as pictured, for hybrids or mountain bikes and panniers and bikepacking bags on the C&O Canal towpath. Image by Camille von Kaenel

The trail is a combination of gravel and hard and loose dirt. It can be bumpy, especially after the first 20 miles, and hazards like potholes and mud are not uncommon. For this reason, its best to tackle the towpath with tires at least 35mm wide. And dont forget to bring a patch kit with you!

Torrential rains, floods and fallen trees have washed out or damaged parts of the trail in the past, leading to temporary closures. The National Park Service alerts visitors to conditions of the trail on its website.

3. Bring gear to enjoy the river 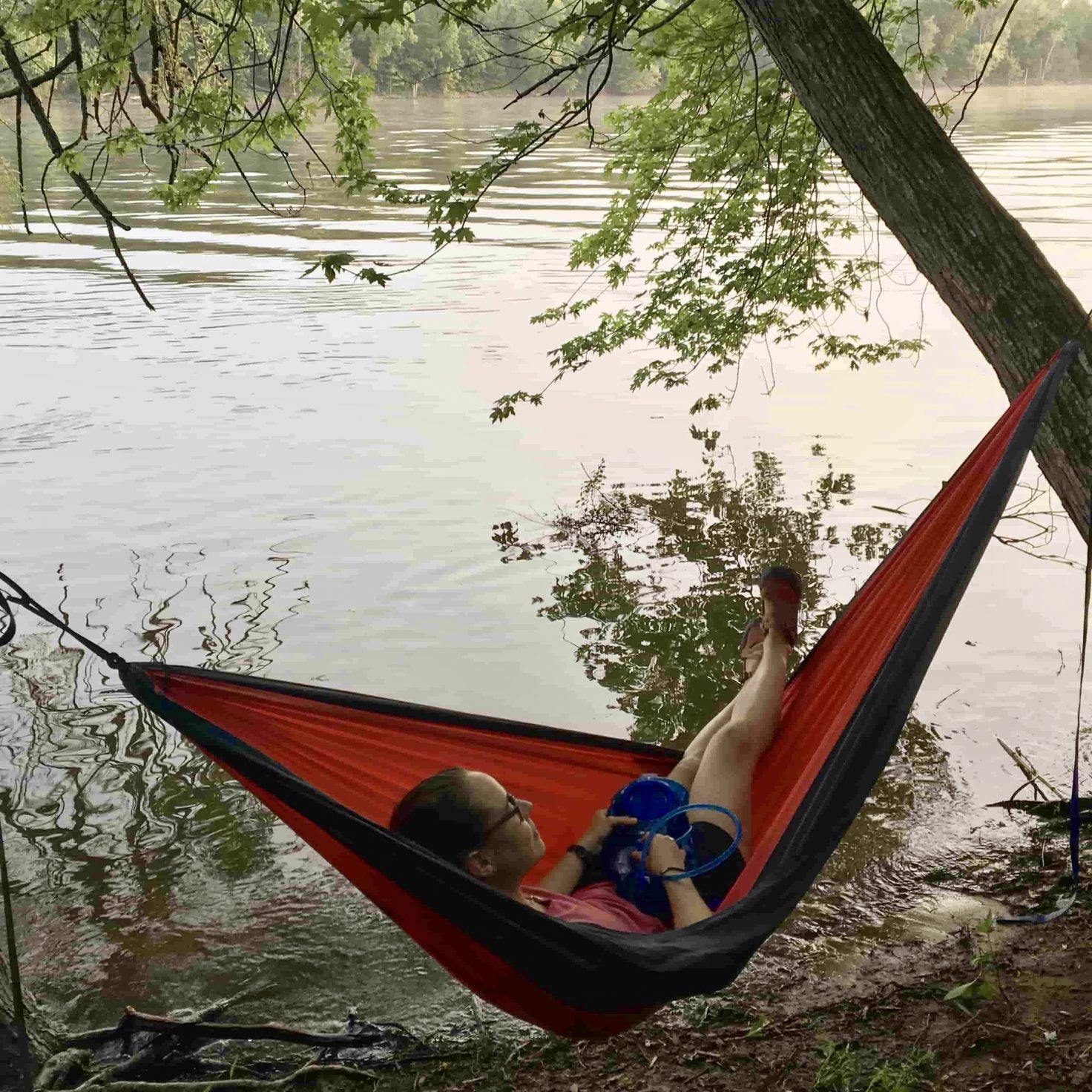 The author enjoying her hammock. Image from Camille von Kaenel

The Potomac River is not just lined with monuments and cherry blossoms. Campers along the C&O Canal towpath will get to know a whole different side to the storied river.

The farther you get out of the city, the cleaner the water gets. That means you can fish and even swim. Outfitters in the towns along the river offer all sorts of water activities, like floating and kayaking.

Make sure to bring a hammock for maximum enjoyment of the riverside. Note that theyre allowed only at the hiker-biker campsites.

4. Take your time in Harpers Ferry 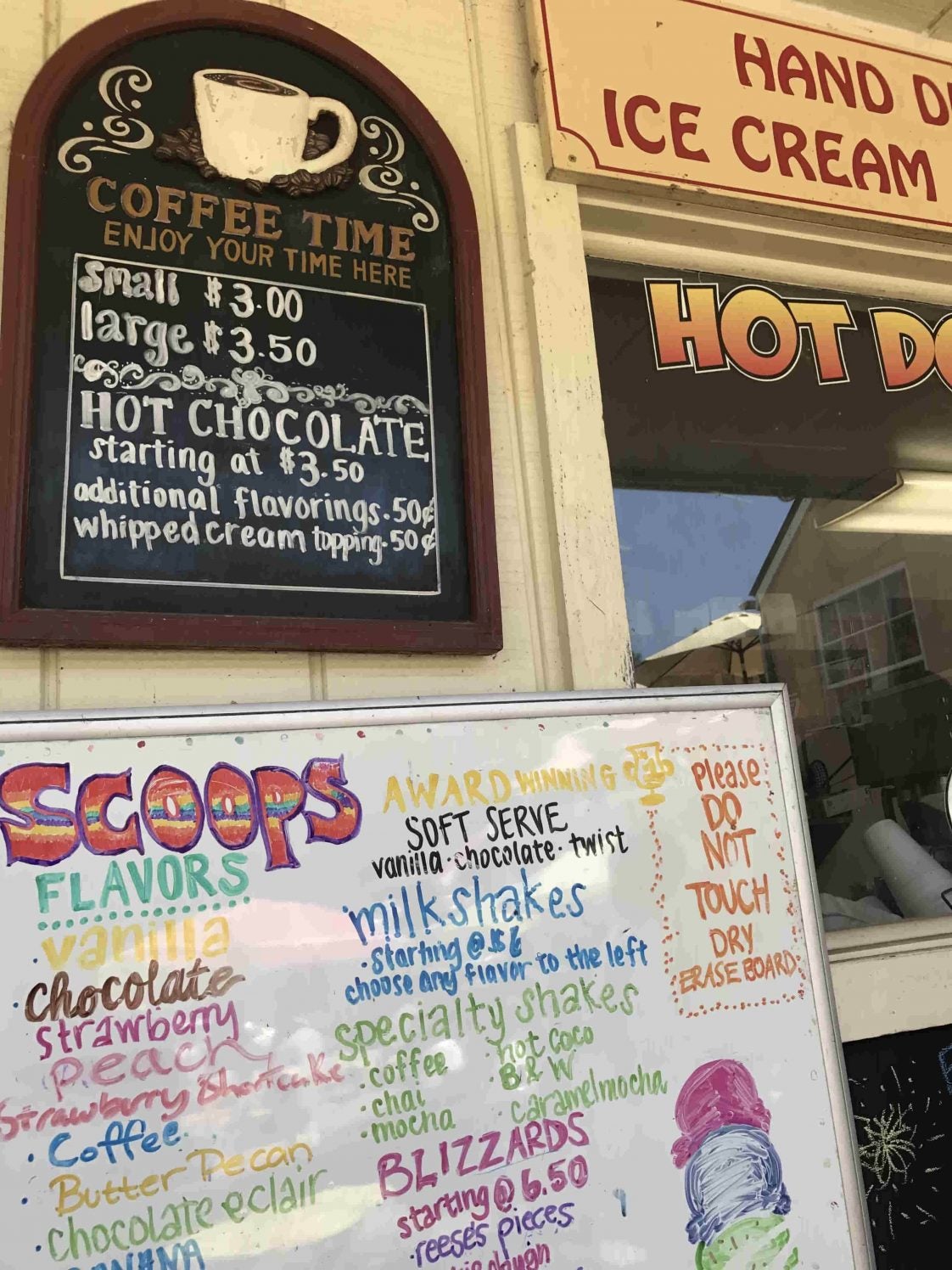 The C&O Canal towpath brings hikers and bikers through Harpers Ferry, the historic town at the confluence of the Shenandoah and Potomac Rivers. Its worth a stop to explore. Thomas Jefferson stopped by in 1783 and called the view of the Potomac carving through the valley from the town perhaps one of the most stupendous scenes in nature. The town is also where John Brown led his abolitionist raid in 1859.

Today, its mostly a tourist town with plenty of interpretive historical sites, shopping and foodincluding ice cream and fries that taste glorious after miles of biking. Take a short hike up to Maryland Heights for a view of the town if youve got some spare time and muscle.

5. Amtrak has you covered for the ride back 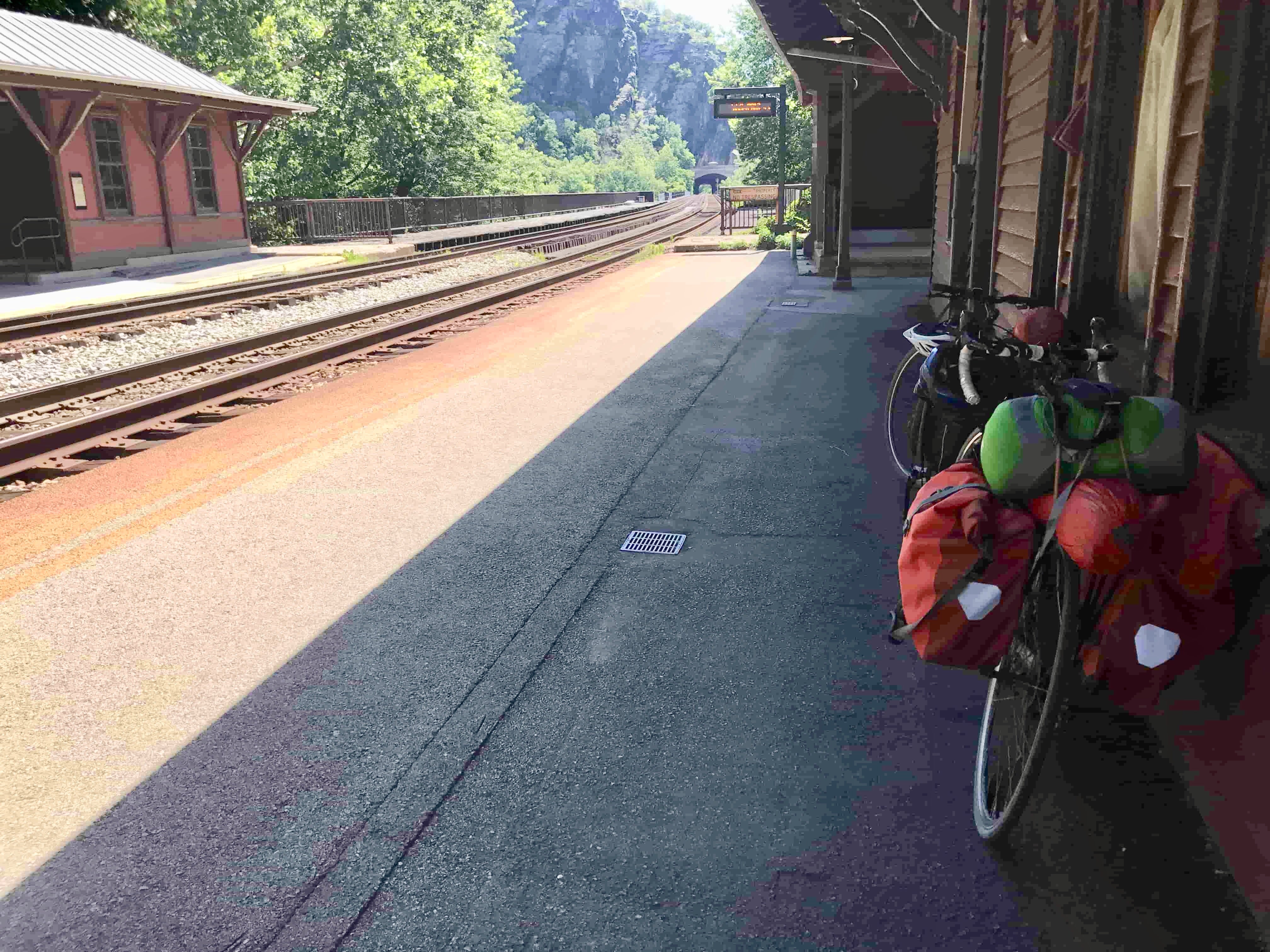 You can easily take the train back to Washington, D.C. from Cumberland if youre feeling tapped-out from the more than 180-mile trip west. The Amtrak Capitol Limited stopsonce a day, and some commuter trains run during the week as well. Be sure to reserve in advance to ensure theres space for your bike.

The post Escape from DC: Bikepacking the C&O Canal Towpath appeared first on The Dyrt Magazine.