Skip to content
No, it is not my wedding anniversary, although it would have been Carol's, which I am trying hard not to think about as you can well imagine. Indeed it is the 13th anniversary of this little space on the gigantic world wide web, although when I began, I am thinking it was far smaller. Anyway, it's been fun to write about most anything you can think of all these years, however, it began with THISvery short post. Re-reading it just now, which takes all of about 30 seconds, I see things have not changed much as I am still "camera crazy!"

Let's see what caught my fancy this week, shall we? Oranges, that's what. Ever since Red Hill Grove closed up a few years ago, I've relied on supermarket juice, but when I saw some juice oranges at Clemons this week, well, I've still got my juicer. 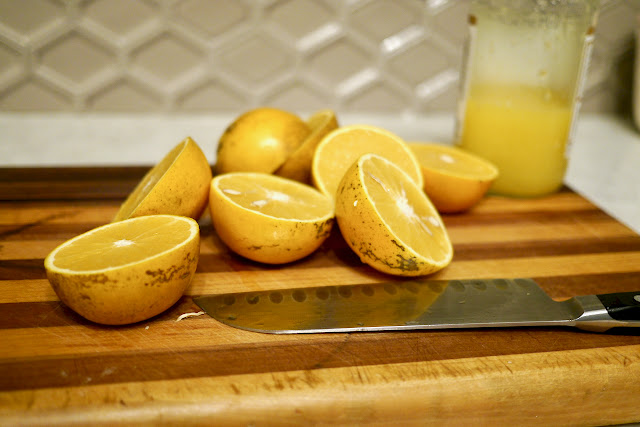 It was like having an old friend back in the house! Pretty much without fail, I begin each morning with orange juice, much of it not great, but this stuff.....heaven!!

We are both very tied up all of next week with the rummage sale, or at least that is what the schedule looks like right now, so we just had to get out and about while we could. Nothing too far afield, in fact, one of our excursions was fairly close to home, and that would be walking around Lake Baldwin in Baldwin Park. We did that years ago for a fundraiser Michelle was involved in but have never returned. The weather this week has been crazy warm, yet without the humidity, it is bearable. I am SO dreading summer I don't even know how I will manage it for another year. But, I digress.

On this day we saw a variety of landscapes from this, 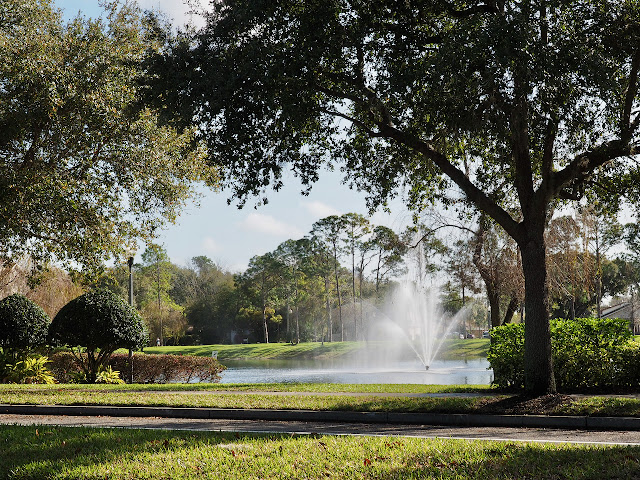 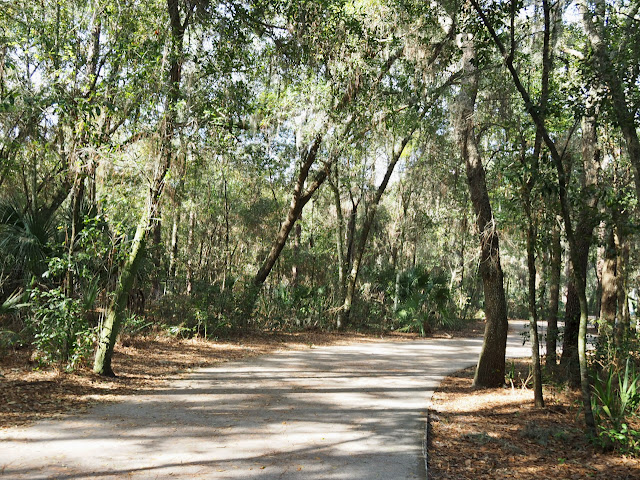 Although the first one is pretty, I much prefer the second one. I was delighted to see a Cormorant up close and personal on one of the dock roofs there. When the packs have come to our lake they are generally too far away for me to see how interesting they are. 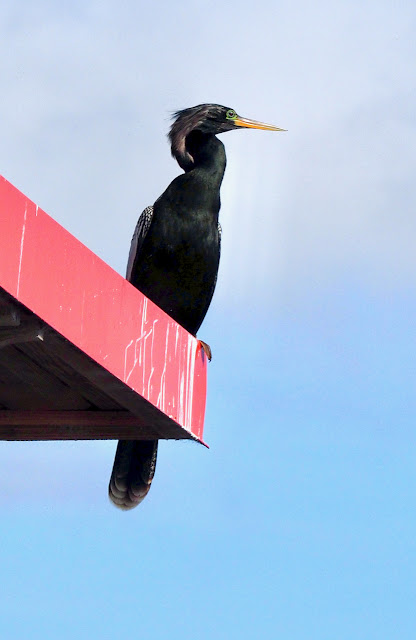 Bruce was ready for lunch and although we discussed different places to eat, in the end we went somewhere new to us, Fish on Fire located on the corner of McCoy Road and Daetwyler. Some folks recently told me it was good, so we decided to give it a try. I learned that the restaurant used to be called, Fish, however, that building burned down so they changed their name. 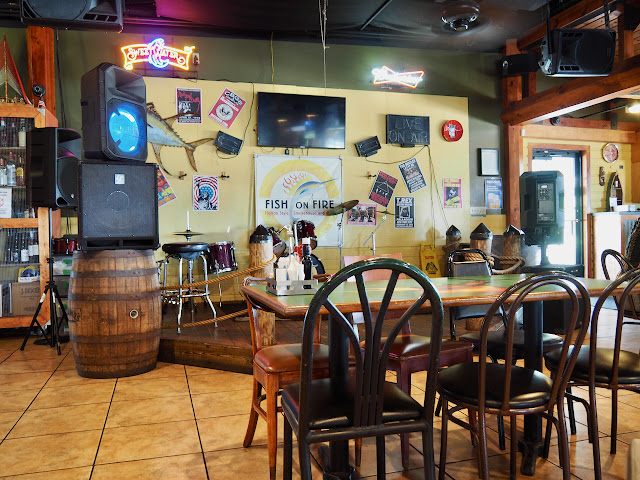 While fairly quiet while we were there, I suspect it is jumping on the weekends. The food was super yummy which I can't say for every restaurant we go to!

I visited Maureen one morning and she is much the same, no better, but fortunately no worse. She managed to stay awake my entire visit, always a plus.

The quilt I've been working on has been mostly neglected until one day this week, I got to it for some hours, putting the pieces together, one by one. 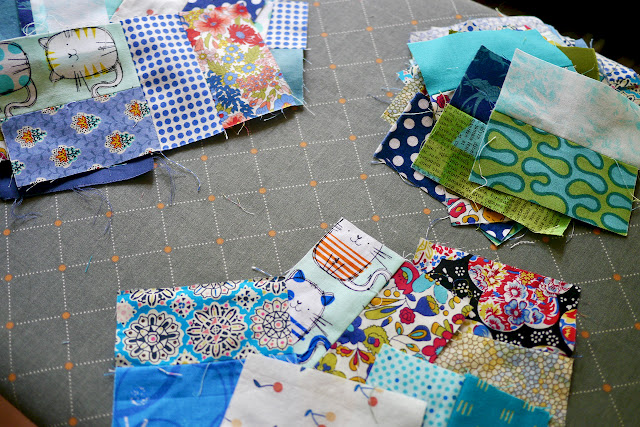 Making a scrappy quilt is kind of fun because, as you can see, nothing matches although I am trying to mostly go with predominately blue. I am particularly delighted to be using some of the Liberty fabric Matt gave me eons ago, as well as some he brought home from Japan. One of the things I most like about this type of quilt is that I can reminisce about how I acquired each fabric. Then too, it reminds me of life, one day at a time, some the same, while others not so much. Each row has 128 pieces which is a bit daunting but, as I say, one piece at a time. As you can see, I've got a very long way to go. 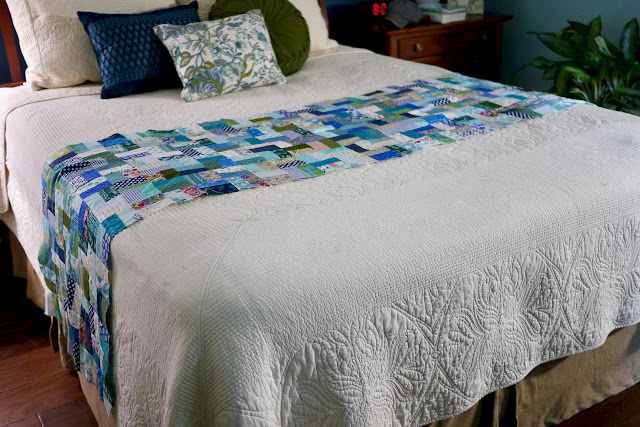 Last week we took our bicycles to Orange Cycle for tune ups. Bruce's had sat around, unused for years, whereas the green one I am using has been ridden more recently but it, too, had sat for some years. Anyway, yesterday we picked them up and they look and act like brand new with new tires, brake pads, and a new, more comfortable seat for Bruce. 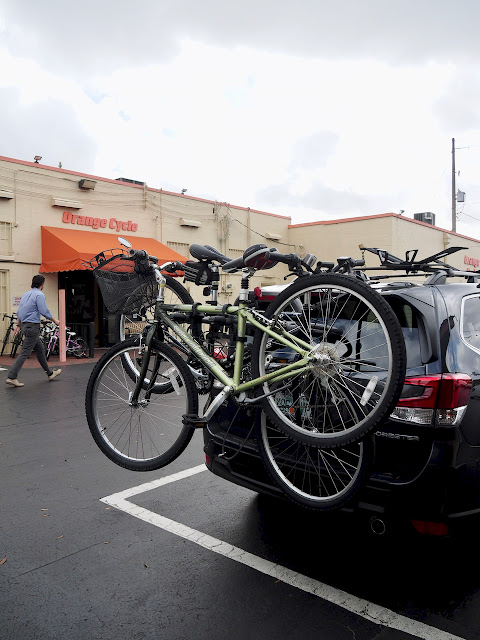 Next up a place to use them....the West Orange Trail in Winter Garden was the place, and what a place it is! 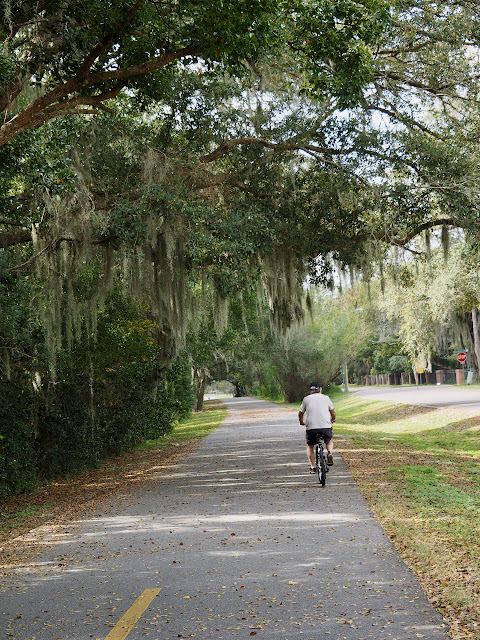 Years ago we rode the other direction so it was all new to us and we were very impressed with everything. That said, there is change afoot in Winter Garden with so many people recently discovering its' charms. For some of the ride, and I suspect most of it used to look like this, the scenery was wooded. 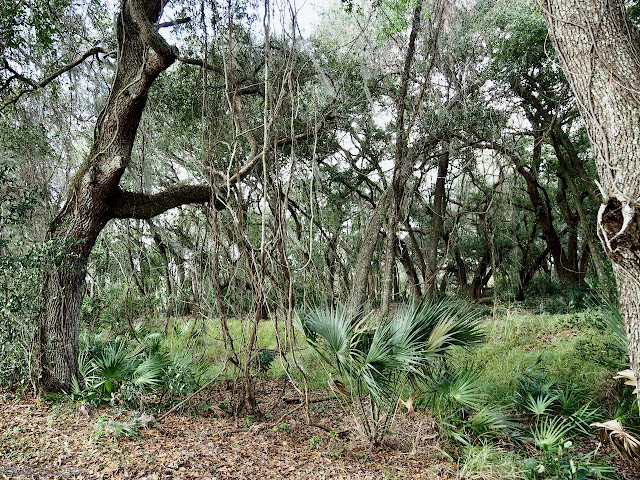 We rode by some small orange groves where the scent perfumed the air. Further down we saw a solitary orange hanging on. 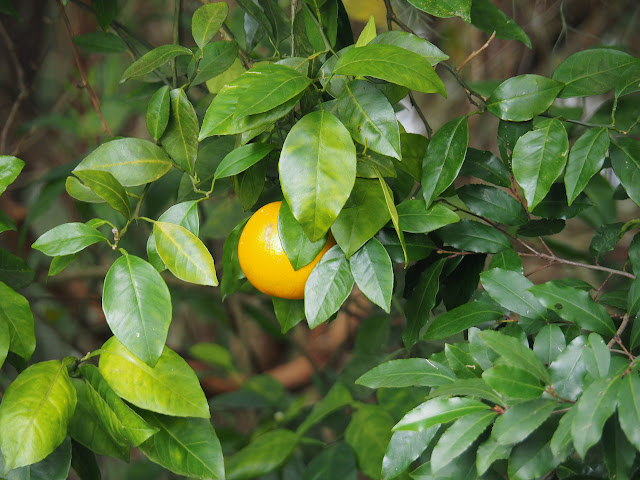 This was a fun sighting. 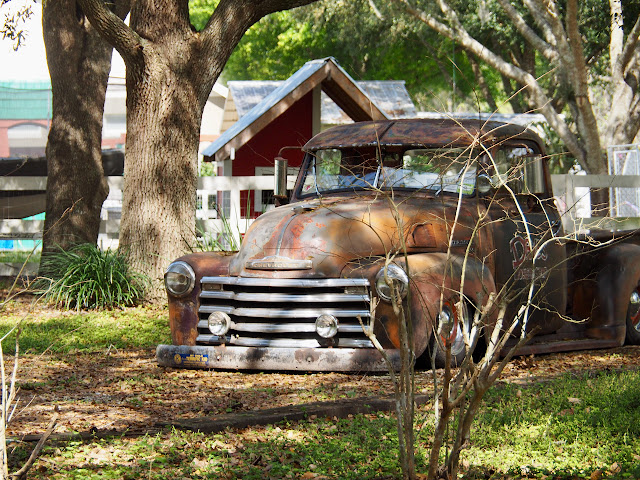 So, there was forested land, and then there were new houses and plenty of them. Very pretty, but it looks as if the land was completely cleared as there were few trees. 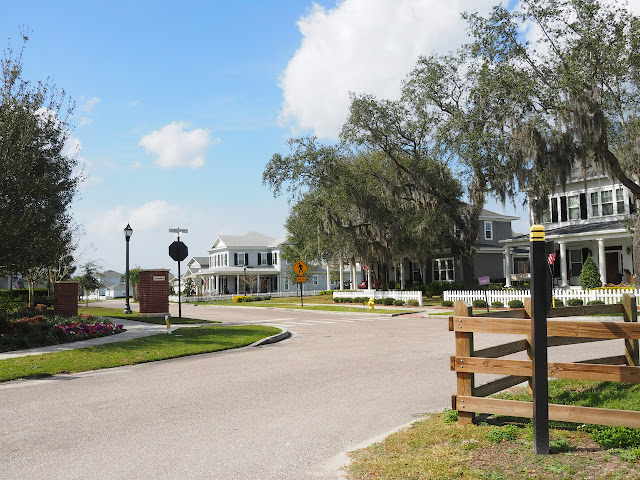 That said, the remaining oak trees out that way are magnificent, including this beauty on a small lake in an area called Oakland Park, filled with new homes and more under construction. 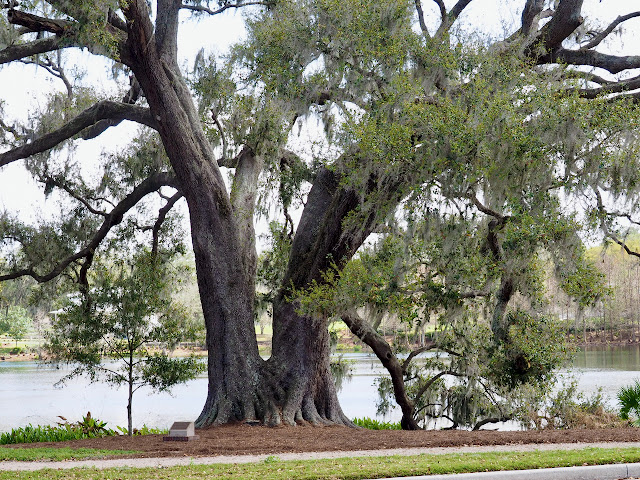 Speaking of Oakland, we cycled to the real Oakland, a tiny town that still has primarily dirt roads. We rode down to the Lake Apopka shore where it always amazes us with how huge it is. Water as far as the eye can see in one direction. 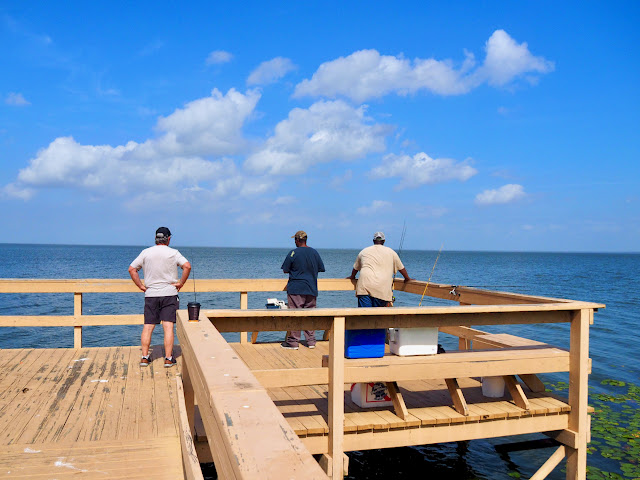 I guess chatting with these fisherman inspired Bruce as he just returned from a couple hours on the lake, pleased with his outing. For the most part, I am fine living in a condo, but when I see a place like this one in "downtown" Oakland, well I have to wonder how long I will feel this way. 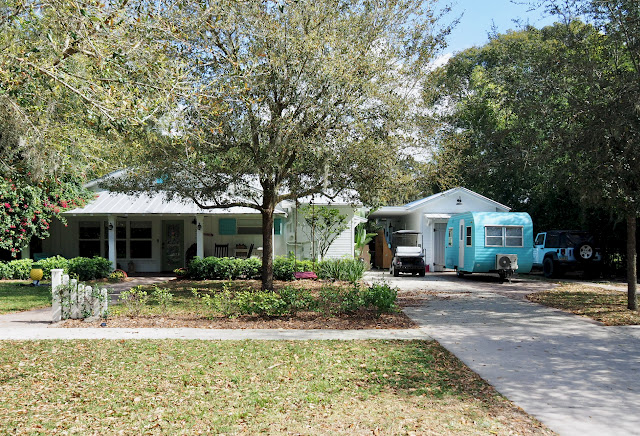 On our way back towards town, Bruce had a little chat with some fellows who work in this place. 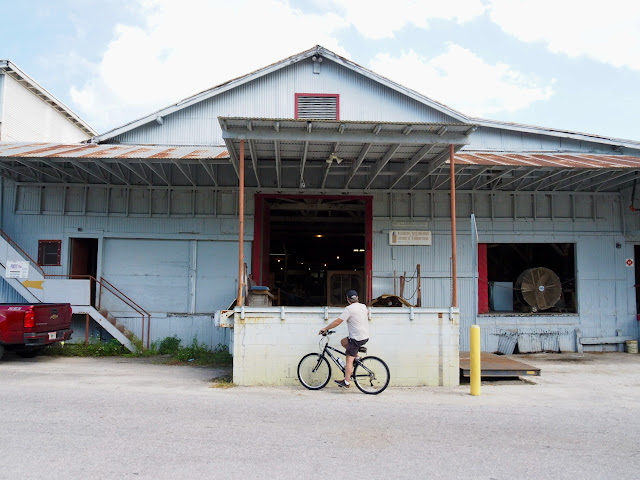 As the sign is small I will tell you it says that they build church furniture, however, apparently they will soon be moving as the area is slated for, you guessed it, development. When I first went out to Winter Garden, as described in this post from August, 2011,I mentioned seeing potential out that way, and boy was I right for a change. That said, I suspect all of the original Winter Garden people are nary too thrilled with all of the new folks coming to town. In fact, when Dana first mentioned WG to me, I thought about how it was always a farming kind of town. No longer is that the case, and in ten more years it will be unrecognizable. Because it is so cute, I can't blame folks for moving there.

Another awesome thing we saw was an Eagle's nest!!! It's been a long time since I've seen one, so I was thrilled and thankful that I noticed a woman intently pointing her camera upward. She was kind enough to share her discovery. One eaglet is calling for food! 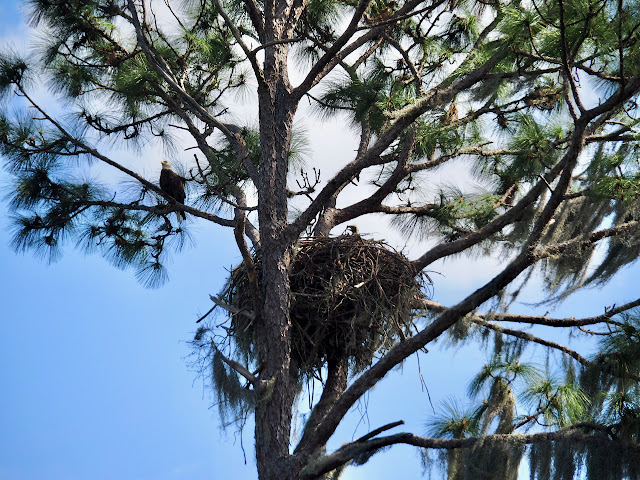 We enjoyed a nice lunch here. 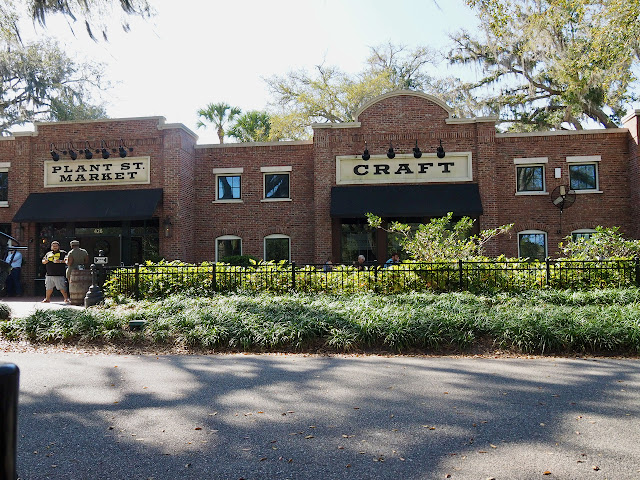 All this to say that we are trying to live our new motto---"doing all that we can, while we can!"

Speaking of that motto, I just got off a Facetime chat with Matt and during our lengthy discussion the subject of traveling came up. Matt and Tom know a thing or two about traveling but next month they are embarking on a journey the likes of which they've yet to experience before. Heading West those two young men are, seeing all of the natural beauty there is to see on a road trip! Matt rarely drives so it will be quite the adventure of which I have to admit, I am a little jealous about. Seeing the Grand Canyon is just one of the highlights. I can hardly wait to see the photographs!

What's our next adventure? Tune in again to find out. In a few years I will wonder about what we were doing at this time of our life and with any luck, I'll have this blog to remind me.