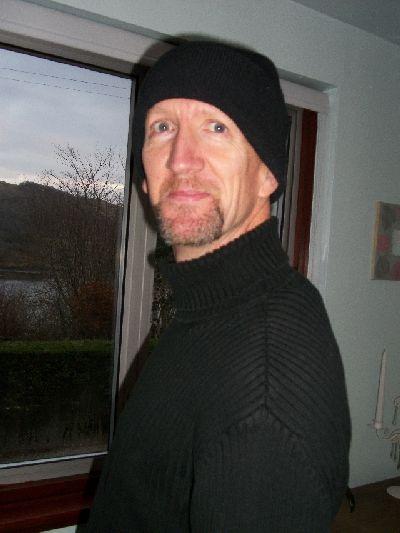 Alex is the author of the popular Ridge Walker Series which at present has three novels in the series and he is diligently working on Book #4. He has also penned a stand-alone thriller titled The Devil You Know.
When you visit his website, the latest blog will treat you with a small sample of his writing magic. The Gingerbread House.
“The wizened old woman stretched out a bony arm and switched off the radio with a relieved sigh, stretching her tired back for a moment before turning her attention back to her hot stove.”

You’ll have to stop by to read the rest. I promise, you’ll like it. alexbreckbooks.com
Alex has generously agreed to a 4Q Interview and is sharing an excerpt of his work.

Alex Breck was born in Scotland in 1962. He studied at Aberdeen University. The many paths he has trodden since then include driving an ice-cream truck in Kansas, banking in San Francisco and teaching English (badly) in Madrid. He has been a director of both a health club and a meat factory but would stress there was no obvious connection between the two. He lives quietly on the beautiful West Coast of Scotland where he likes to ride his bike up hills and down hills much to the consternation of his family. The name Alex Breck is a pen name using an old family name and that of a historical ruffian who might be found in the fine novel Kidnapped.

AB: Ridge Walker isn’t your run of the mill hero. But as is often the case in real life, it’s when we have particular circumstances thrust upon us, that we discover who we really are and what we are capable of. Each of the books has a large amount of the action taking part in a particular overseas location; Central America for ‘He Who Pays The Piper,’ Pakistan in ‘The Piper’s Lament’ and Tokyo for the third adventure, ‘The Piper’s Promise.’ The fourth book sets out to trump them all and you’ll just have to wait a few months to find out why.

What ALL the books have in common is a firm connection to the protagonists Scottish and Irish roots. Despite everything that Ridge has to overcome, his deep love for the Scottish Highlands shines through the darkness.

These adventure thrillers aren’t for the faint-hearted, yet they are full of that quirky gallows humor and carefree optimism famous in the Scots’ character.

4Q: I understand you are working on Book #4 in the series. Care to tell us what we can expect.

AB: This book sets out to end, once and for all, the cat and mouse game between the Piper and his numerous adversaries from around the globe. There’s no pension plan for those caught up in his deadly profession and it soon becomes clear that in order to save the people he loves, the Piper will have to make the ultimate sacrifice. Is this finally the end of the line for the Piper…? Bang up to date with topical plot threads including the rise of rightwing populism in Europe and further afield in this, the 75th anniversary year of
the end of WWII, the reader will be catapulted across the globe in an explosive maelstrom of mad-cap adventures.


AB: I have always loved reading and as a young boy I was one of those kids who’d read under the blankets with a torch
long after my folks had bid me goodnight. We moved a lot within Scotland when I was younger, due to my father’s occupation and so it was difficult to sustain deep friendships. I remember we were in the beautiful old university town of St Andrews for two years, where I probably spent the entire time in the old library, devouring every book I could get my hands on.

I think it was around then that I first decided that I wanted to be a writer and also to see as much of the world as I could. Both of these endeavors are still a work-in-progress…


4Q: When was that defining moment when you knew you were going to write stories, when being an author was of paramount importance in your life?


AB: I have felt the urge to write since I was a child really, but the imperative to get a practical education and follow a conventional line of employment was drilled into me by my strongly Presbyterian family background. It took me several years of unfilled job-hopping before I was eventually able to loosen the harness sufficiently to start writing in earnest.

4Q: Is there a favourite spot to write or habits that you enjoy when you are feeling the most creative? 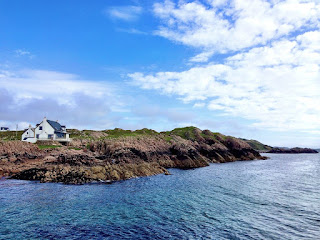 AB: I am lucky to live on a beautiful island on the West Coast of Scotland and so I guess I am already in the kind of place many of you would enjoy coming to on a writer’s retreat. I get a lot of inspiration when out in nature, walking or more probably cycling, then it’s the usual predicament of being able to either jot down or remember the gist of the idea.
As far as the actual writing goes, I am not too precious about where I am at the time, as the instant I begin, I am transported to whatever place I am writing about and I generally lose all sense of time and space.


4Q: Tell us about The Devil You Know.


AB: This is an altogether darker look at the themes of 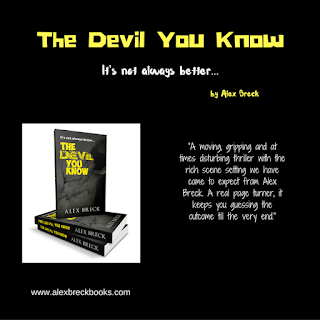 redemption and alienation set wholly in Scotland and Glasgow in particular. I wanted to blur the lines between good and bad and in ‘The Devil You Know’ there are good people who do bad and bad people who do good. One of the great things about being a writer is having the opportunity to take a pop at authority or some of the craziness in society and so I let rip here, more than in my adventure thrillers.

The protagonist, Lachie Maclean, has to be, on first meeting, one of the least likeable heroes you’ll come upon and again I thought that a one-off thriller would be the perfect vehicle to explore his character to the full. But funnily enough, I’ve had so many people ask me for a second helping of this unusual dish, that I am now well on the way to completing the plotting for a sequel to be published later in 2020.


AB: At the moment I am in the last stages of putting the finishing touches to the 4th Ridge Walker novel, plotting the sequel to ‘The Devil You Know,’ helping a local group of writers to publish an anthology of short stories and working on my first non-fiction book about Blockchain technology.


AB: Wish me luck in a month’s time as I embark on a one-thousand-mile bike adventure from the southernmost tip of

England to the northernmost point of Scotland, Land’s End to John O’Groats. I am cycling 100 miles a day for 10 days to raise funds for the devastated wildlife of Western Australia following the terrible bush fires earlier this year. You can sponsor me up until June 30th here - https://www.justgiving.com/crowdfunding/myepicbikeride

An Excerpt from Book 3 in the Ridge Walker Series - The Piper’s Promise
(Copyright is held by the Author. Used with permission.) 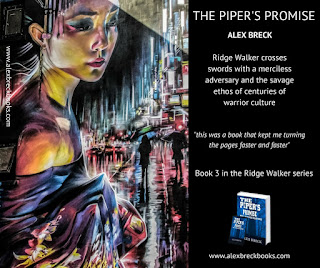 Ridge rubbed his eyes and checked his watch. Still dark outside but there seemed little point in trying to get back to sleep. The pair of them had been up half of the night with Alex, and Orla must have taken him down to the warmth of the kitchen. He decided to go make them both a mug of tea and then see about sorting out some small trees for the new ornamental defence he’d planned for the more exposed left-hand side of the garden. Beech had been his preferred option as it would grow reasonably fast and even although it was a deciduous plant he knew from his research elsewhere that a strong beech hedge would retain its leaves throughout the winter having become a dry rustling gold colour by then. All the better for disguising the barbed-wire fence he’d be growing the hedge through.
‘Mornin’ love’ he muttered as he stumbled into the kitchen and slammed the kettle under the cold tap. Orla rocked manically on her favourite chair, the little boy wrapped up in a blanket in her lap.
‘Don’t you be “morning” me, ye eedjit.
Left that phone on again last night, so you did. I’d just got him down and then it goes off, jumping about on the dresser there like some demented sex toy!’
‘Sorry angel! I keep forgetting to put the bloody thing off.’
Ridge could see his wife laughing despite herself. She’d obviously been savouring that comment for hours and he placed his hands lightly on her shoulders and rubbed his face in her thick red hair. Then he put two mugs of tea onto the heavy wooden table and went to pick up his mobile. He’d upgraded it a few weeks ago although he didn’t see the point as he hardly used the thing. So now he was habitually pressing the wrong buttons at night and often it stayed on when he’d thought he’d powered it down. The upshot was on the odd occasion when he’d wanted to use it, the battery would be as spent as the teenage winner of a weekend wanking competition.
He stared at it now. Still defiantly holding a charge. And ten messages from Thaddeus. Plus one phone message. Interesting.
‘It’s been Thad.
You’d think with all the globe-trotting he does he’d realise the time difference! He’s probably just gloating that he’s found another rare Japanese Bowie LP.’
Orla growled like a sleepy mountain lion. ‘Well seeing as he’s bleedin’ well called you so many times d’ye not think you could at least call him back?’ But Ridge already had the mobile up to his good ear and he waited for the voicemail to come through. Orla watched him with only a half interest until she saw his eyes go wide and his mouth gape open in a credible impersonation of a whale at dinner.

Thank you, Alex, for being our featured guest this week and for sharing your thoughts.

For all you readers wanting to discover more about Alex and his novels, please follow these links: